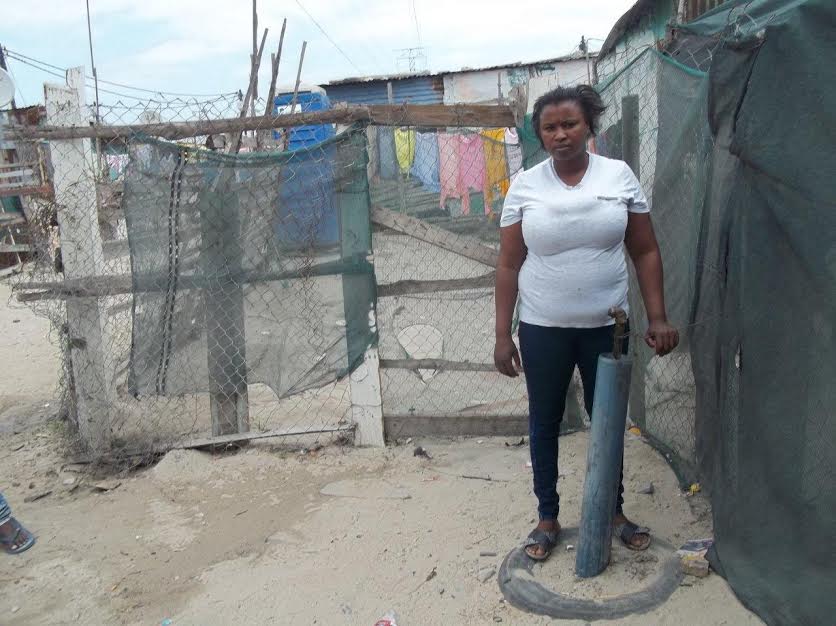 Khanyisa Msengana stands at one of the broken taps in Madiba Square, Khayelitsha. Photo: Vincent Lali

While South Africans are being urged to wash their hands frequently to protect themselves from Covid-19, hundreds of families are sharing three water taps in Madiba Square, Khayelitsha, in Cape Town.

The City of Cape Town installed the taps in 2005 shortly after the shack dwellers started to trickle onto the land, said community leader Sibongile Nyalela. Nyalela says there are 380 numbered shacks in the settlement, and many shacks which do not yet have numbers.

“We used to depend on eight water taps for water to wash, drink and cook, but now only three are producing water,” he said. Families battled to get water to wash their hands, he said. The other taps are broken.

Nyalela said community leaders had now agreed with officials that the City would install additional taps and fix the leaking and dirty toilets.

Community leader Khanyisa Msengana, who lives with her husband and two children, said long queues form at the three water taps during weekends. “I wait for an hour in a queue before I get one bucket of water to do laundry, cook and drink at weekends,” she said. Sometimes the water stops flowing.

“If I use the one bucket of water to do laundry then I remain without water to cook and wash hands,” she said.

Community leader Sibongile Mashwabana said she walks for about ten minutes to fetch water in another area where she stands in a queue for about an hour.

Nyalela said shack dwellers wanted the City to install 18 taps throughout the settlement. They also want some close to Mew Way (a major road) and some in the middle of Madiba Square so that fire fighters can access water easily to battle fires. Fire fighters cannot reach the square and residents need water to fight fires themselves, he said.

“We battle to find water to extinguish our shacks when they burn,” said Nyalela.

Toilets in the settlement were not maintained, he said, with dirty water leaking from old pipes.

Mashwabana said even janitors battled to keep the toilets clean as they had no easy access to water.

Regarding the leaking and blocked toilets, Limberg said: “The City has employed temporary janitors from the area to clean the full flush toilets. A City maintenance team conducts repairs in the informal settlement.”

Nyalela said he could not remember anyone stopping the City from installing water taps.

“There were still few shacks when the City first put up taps here, so there was enough space for officials to install water taps, along with drainage infrastructure,” he said.

He said shack dwellers were willing to be moved elsewhere to create space to install drainage infrastructure.