'I would rather go and die in Venda, than be sick away from my family,' Amos Ndou said. 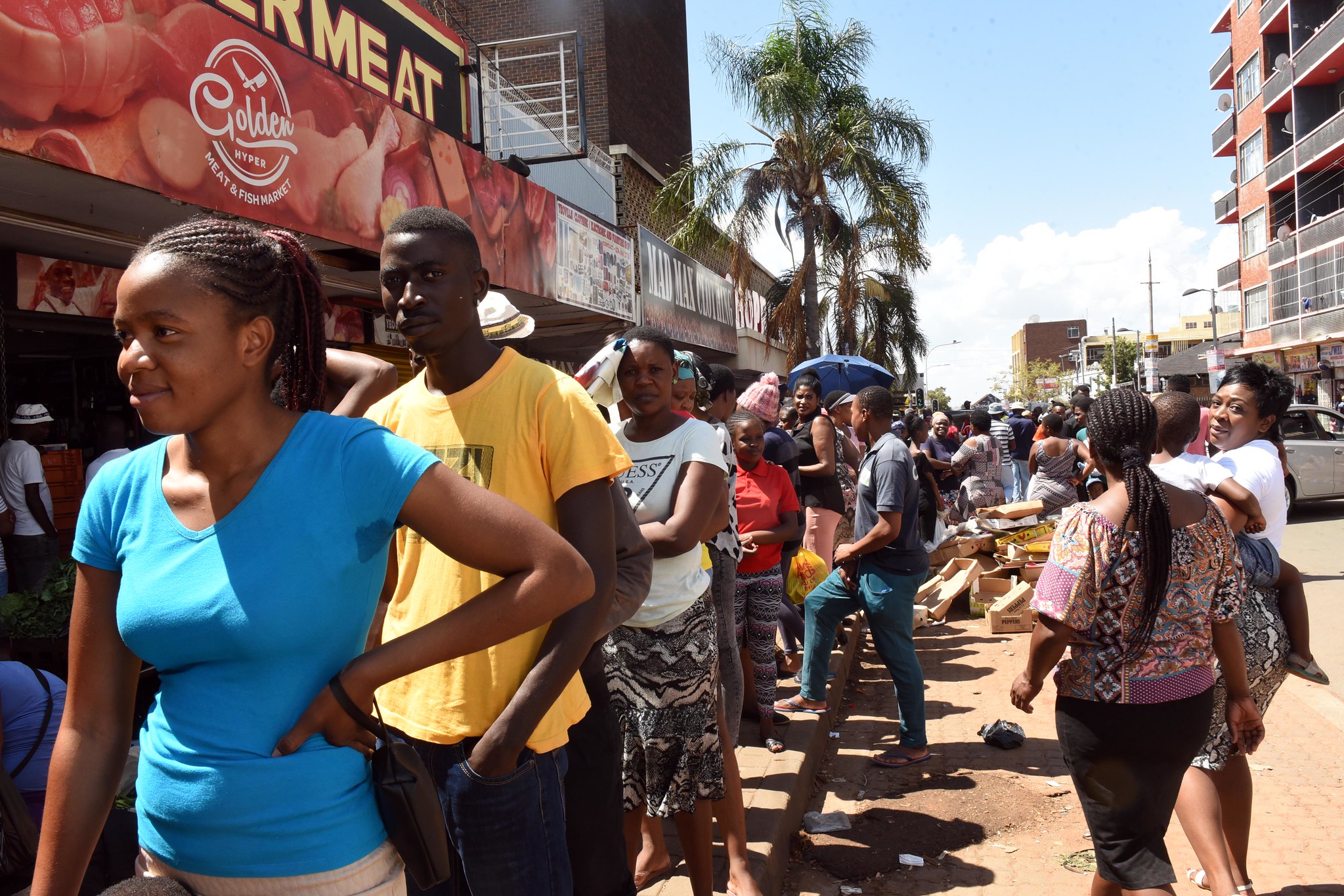 Yeoville residents in Johannesburg queue outside Boxer, 26 March 2020, before the lockdown. Picture:Nigel Sibanda

A recent plea by Gauteng premier David Makhura for all residents to remain in the province during the 21-day lockdown has fallen on deaf ears.

Instead, ahead of the lockdown kicking in at midnight on Thursday, people swarmed at Wanderers Taxi Rank to make their way home: to a rural area, to another province, or to another country, as was seen at a temporary bus station, where buses were ferrying people to and from Zimbabwe.

Amos Ndou was among many passengers heading home to Limpopo.

Ndou said he was missing his wife, children and grandchildren in Venda.

“I can’t stay away from my family at this time. I am their only breadwinner and they need me to come and spend these hectic days ahead with them. I am not afraid of the coronavirus because I don’t have it and I don’t think it is in Venda. I would rather go and die in Venda, than be sick away from my family,” Ndou said.

Johannes Thule, who was heading to Bela Bela in Limpopo, said he also wanted to spend the upcoming 21 days with his family.

Thule hoped that they would reach home before the cut-off at midnight.

Ludwick Ndou said he was from Mossel Bay in the Western Cape, but a taxi would take him to Elim in Limpopo.

“I am afraid of this virus. These are the times a man wants to spend with his family. I don’t want to get sick alone, away from my family. I want to be home where I will be safe, ensuring that I can protect my family from being infected,” he said.

Zimbabwean bus driver Donald Mudzunwe said he left Cape Town on Wednesday and he was ferrying a load of his fellow Zimbabweans back to their motherland.

Mudzunwe claimed that he had been tested for the coronavirus in Cape Town and possessed proof should he be stopped on South African roads.

“I think I will reach Zimbabwe before 18:00, depending on the time we will spend at the Beitbridge border gate. We are aware that there is coronavirus in Zimbabwe – my passengers said they are not worried; they want to be home before South Africa is under lockdown.

“I don’t think everybody on my bus has been tested. I have heard passengers chatting that they have been tested and are all negative and that gave assurance that I won’t be infected,” said Mudzunwe.

Unlike other passengers heading to Zimbabwe who spoke to News24, John Johannes said he had not been tested and didn’t know if he had been infected or not.

He said he was missing his wife and children in Harare, Zimbabwe.

“I am going home. I don’t mind if I am being infected back home in Zimbabwe, where I know that should I die, I will die next to people who love me, unlike here in South Africa. I am going to return to my workplace as soon as South Africa has been declared safe and the lockdown is over. For now, Zimbabwe is calling my name,” he said.

Wisdom Ranga said he had long planned to spend the Easter holidays with his family in Harare.

“When President Cyril Ramaphosa declared a lockdown, I saw it as an opportunity to go home. I am aware that Zimbabwe is also a high-risk country, but what can I do as a foreigner in this country?” said Ranga.

Jane Mwai said that she had only been in South Africa for two weeks and was visiting her aunt in Cape Town when she heard about the lockdown.

Mwai claimed she had tested negative for the coronavirus when she left for Zimbabwe on Tuesday in Cape Town.

“The state of health in Zimbabwe is worrisome and don’t know what will happen should the number of people infected spiral out of control. I am aware that some nurses have downed tools back home.

“What can we do as Zimbabweans? We love our country and this is the time when our country needs us most. We need to be there for each other and prevent the virus from spreading.”