Wayne Renkin of the Tshwane Homelessness Forum said the incident was self-created because of a lack of planning and slow procurement processes. 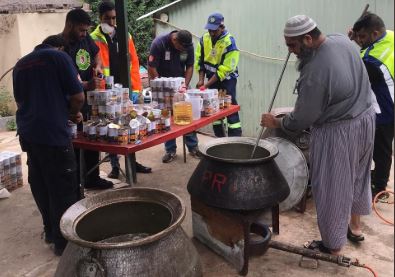 Meals are behind prepared for hundreds of homeless people at Caledonian Stadium in Pretoria, 30 March 2020. Picture: Twitter / Yusuf Abramjee

Homeless people, who are being housed at the Caledonian Stadium in Tshwane, were left to fight each other for sustenance because not enough food was provided.

News24 has seen a video recording that showed homeless people scrambling for the last available food.

Metro police officers can then be seen pepper-spraying the group, forcing them to disperse.

It is understood the fight broke out because not enough food had been provided as law enforcement keeps rounding up the homeless and housing them in the stadium because of the lockdown.

To put the numbers of those being sheltered at the stadium into perspective, around 1,000 people had been placed in the stadium by Saturday, and that figure more than doubled by Monday.

With more than 2,100 people being sheltered in an inadequate space, not being allowed to leave, they have no other means of looking after themselves, and this, ultimately, ended in the battle for food.

Wayne Renkin of the Tshwane Homelessness Forum said the incident was self-created because of a lack of planning and slow procurement processes.

He added homelessness had never been a priority for the government and now, with the lockdown, government officials have no idea what to do with the homeless.

This had been exacerbated by the fact that the issue was not given sufficient attention during the planning stages of the lockdown, Renkin said.

At least two weeks before it started, the forum approached the City of Tshwane to plan appropriately with regard to the coronavirus outbreak, but this did not come to fruition until the last minute.

“If we were engaged from the start, none of this would have happened,” Renkin said.

“The problem we sit with now that we have a lockdown is that people don’t know what to do with the homeless – they have never approached this issue.”

He added without consistent political will and instructions from the government, this would continue to happen.

As more of the homeless in Tshwane are being placed in the stadium, questions have also been raised about the conditions there as well as the health risks.

Speaking on condition of anonymity, several homeless people confirmed they were brought to the stadium by law enforcement officers, saying they had complained about the conditions they were forced to stay in.

According to the men who spoke to News24, living conditions in the stadium were dirty and cramped. People fear getting sick at the overcrowded venue as the rate of those with co-morbidities is high in the homeless community.

Renkin said there was no physical distancing at the makeshift shelter or adequate sanitation, adding some people, who were forced into the stadium, have also started suffering from withdrawal symptoms.

“The fact that they are rounding up people and throwing them in an inadequate space is a gross violation of their dignity and humanity,” he added.

The University of Pretoria’s Community Oriented Substance Use Programme has stepped in and started screening the homeless for ailments and provided opioid substitution therapy in the form of oral methadone to help those suffering from withdrawal.

When News24 visited the stadium on Monday, there was a long line of people waiting to be screened or for a dose of methadone.

Food was also being delivered for dinner, but it is uncertain whether it would be enough for everyone housed at the temporary shelter.

As the situation in the stadium is unsustainable, plans are afoot to move people to other makeshift shelters.

Renkin said relocation to other sites should be done as soon as those sites were up and running with adequate infrastructure to house those who have nowhere to go during the lockdown.

According to a statement by Tshwane administrator Mpho Nawa, the congestion in the stadium would be eased as people would be relocated to improved and adequate accommodation facilities.

The new makeshift shelters include the Heartfelt Arena, NG Church in Arcadia and Unisa study halls in Sunnyside.

“In the meantime, additional sites such as schools, churches and parking lots are being assessed on an ongoing basis because the number of those who need assistance is expected to rise,” Nawa said.

He added teams of social workers, municipal health workers, general workers and law enforcement officials have been deployed across the various sites.