Outside popular retailers - including Edgars, MRP, Woolworths and Ackermans - people were lined up to stock up on winter clothing and other items. 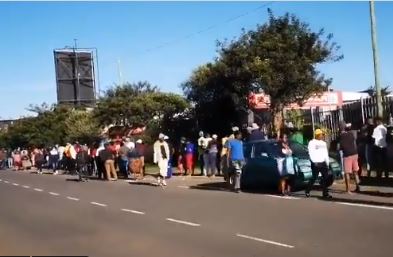 Many Durbanites braved long queues at malls in their neighbourhoods on Friday to stock up on essential items on the first day of level 4 lockdown regulations.

At Gateway Mall, crowds gathered in large numbers to take advantage of the reopening of retail stores.

Outside popular retailers – including Edgars, MRP, Woolworths and Ackermans – people were lined up to stock up on winter clothing and other items.

Dan Kistasamy, who visited MRP with his wife and daughter, said he was concerned about the crowds, but that he had to embark on winter shopping.

“What can we do, you know? My child and wife need clothes, so I have to provide for them. We are trying to be careful, but you can’t predict how other people will behave. We came early on, so we can get it done and go home.”

Closer to Durban, the popular Bridge City Mall was also busier than usual as retailers opened.

Outside the Pep store, a line formed as many families prepared for winter.

Sindi Nkosi, a mom, said she was annoyed by the queues.

“Honestly, this mall is always busy. I do not like the lines and so many people, but we need things. Hopefully we go back to normal soon.”

One of the most popular Durban tourist destination, the Golden Mile promenade, was also open on Friday as level 4 lockdown commenced.

Durbanites took to the popular beachfront area to exercise, which is permitted during level 4 of the national Covid-19 lockdown.

When News24 arrived at the beachfront, there was a small contingent of officers who monitored the public, constantly checking for masks and urging people to keep a physical distance.

About an hour and a half into the 06.00am to 09.00am exercise time, a taxi full of metro police officers arrived and began strictly enforcing lockdown regulations. Officers prevented people from walking together, even if they arrived at the beach from the same home.

One man was asked to leave the beachfront after he was spotted without a mask.

“You must go home now, this is not allowed,” the officer said to the man who immediately complied.

North Beach resident Emeka Obi said being able to step outside and exercise was “great”.

“We have been longing for this. A taste of freedom at last. Thank God we can do this. We are free. Five kilometers is okay, at least we can keep the heart rate pumping and going. I try to keep people at a distance – at about two metres.”

Runner Ishara Umraw was also excited. “It is absolutely awesome. It’s like freedom once again. Yes, I’ve been missing this. It is a daily walk, and I will be back tomorrow morning. I don’t feel risk because people are running at a distance from one another.”

At the Umhlanga promenade, another popular tourist destination in Durban, people were restricted from running.

News24 was greeted by private two security officers who said they had diverted the public to the road.

“There are many unhappy people, but the promenade is closed. It is too close to the beach, so it is not allowed,” said one of the security officials.

50 shacks demolished in Durban without any warning, say land occupiers
1 week ago
1 week ago
PREMIUM!

50 shacks demolished in Durban without any warning, say land occupiers
1 week ago
1 week ago
PREMIUM!