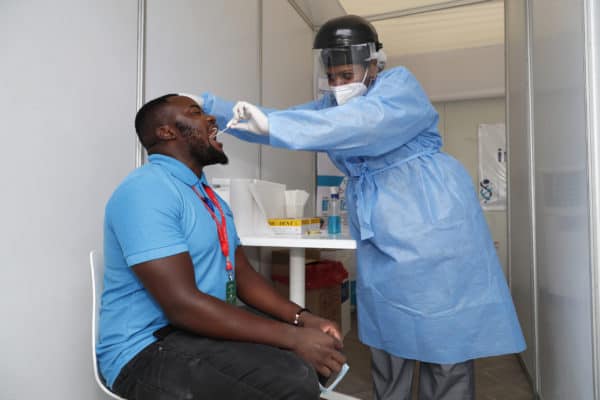 A member of staff undergoes a PCR Covid test during the Pro-Am in Johannesburg. Picture: Getty Images

As of Sunday, 5 September, the cumulative number of detected Covid-19 cases in South Africa is 2,819,945 with 5,931 new cases identified, the National Institute for Communicable Diseases (NICD) confirmed.

This represents a 14.5% positivity rate.

16,654,409 tests in total have been conducted to date in both public and private sectors. The country currently has 144,025 active cases.

A further 111 hospital admissions were reported in the past 24 hours.

The total number of vaccines administered in the country so far stands at 13,545,823.

New Zealand records its first Covid-related death in six months, but health authorities say there are signs the outbreak of the highly infectious Delta variant is being brought under control.

Tens of thousands of people take to the streets in cities across France for another weekend of protests against the health pass obliging people to have proof of vaccination or a recent negative test to have access to cafes, cinemas and many other facilities.

The coronavirus has killed at least 4,550,974 people since the outbreak emerged in China in December 2019, according to an AFP compilation of official data.

The United States has seen the worst average daily death rate over the past week, with 8,565, followed by Russia with 5,570 and Mexico with 5,071.

The pandemic has nevertheless seen a slight drop in the worldwide infection rate, down 3 percent on the previous week to an average of 639,315 infections a day.