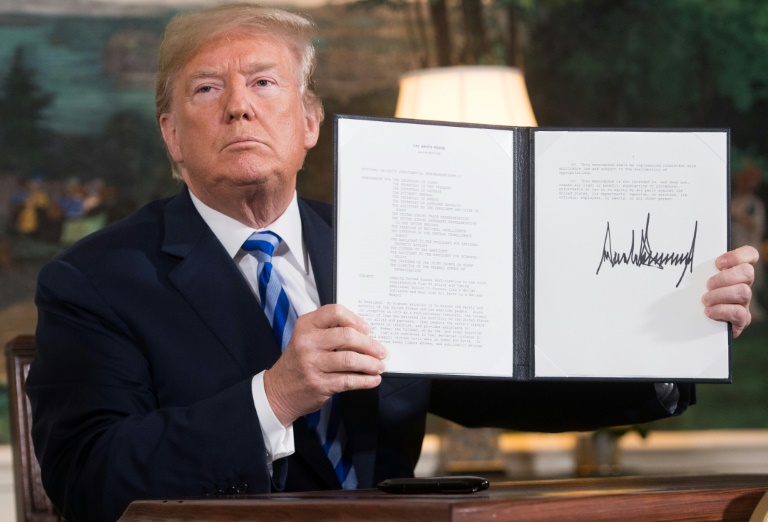 US President Donald Trump signs a document reinstating sanctions against Iran on May 8, 2018. Picture: AFP.

US President Donald Trump on Monday questioned Iran’s claim that it had nothing to do with weekend attacks on a giant oil plant in Saudi Arabia that have cut off five percent of global crude output.

“Remember when Iran shot down a drone, saying knowingly that it was in their ‘airspace’ when, in fact, it was nowhere close. They stuck strongly to that story knowing that it was a very big lie. Now they say that they had nothing to do with the attack on Saudi Arabia. We’ll see?” Trump tweeted.

Trump was apparently referring to Iran’s downing of a US unmanned surveillance drone in June. Tehran maintains that the drone was brought down while it was over Iranian airspace. US officials say the aircraft was in international territory at the time. At the last minute, Trump said he aborted strikes on Iran over the incident.

Tensions have escalated since drone attacks on two major oil facilities in Saudi Arabia on Saturday.

The strikes knocked out more than half of crude output from the world’s top exporter – five percent of the global oil supply – and cut output by 5.7 million barrels per day.

Yemen’s Houthi rebels, who have been locked in a war with a Saudi-UAE-led coalition since 2015, claimed responsibility for the attacks, warning Saudi Arabia that their targets “will keep expanding”.

But US Secretary of State Mike Pompeo swiftly accused Iran of being behind the assault, without providing any evidence. The claim was rejected by Tehran which said the allegations were meant to justify actions against it.

Trump said in a tweet on Sunday that “there is reason to believe that we know the culprit, are locked and loaded depending on verification, but are waiting to hear from the Kingdom as to who they believe was the cause of this attack, and under what terms we would proceed!”

Turki al-Malki also told reporters in Riyadh that the early morning strikes on Saturday were not launched from Yemen as claimed by Iranian-allied Yemeni rebels who are at war with Saudi Arabia.

Al-Maliki did not elaborate further and said the results of the investigation would be made public to the media when complete.

Meanwhile, Trump on Sunday announced he had authorised the use of the US emergency oil reserve “if needed” following Saturday’s attacks.

Iran: Nuclear deal 'within reach' if West shows goodwill, ball in US court
3 days ago
3 days ago

Iran: Nuclear deal 'within reach' if West shows goodwill, ball in US court
3 days ago
3 days ago