Security forces have escalated an increasingly brutal crackdown on demonstrators - killing more than 50 people since the coup - but protesters rallied again on Saturday. 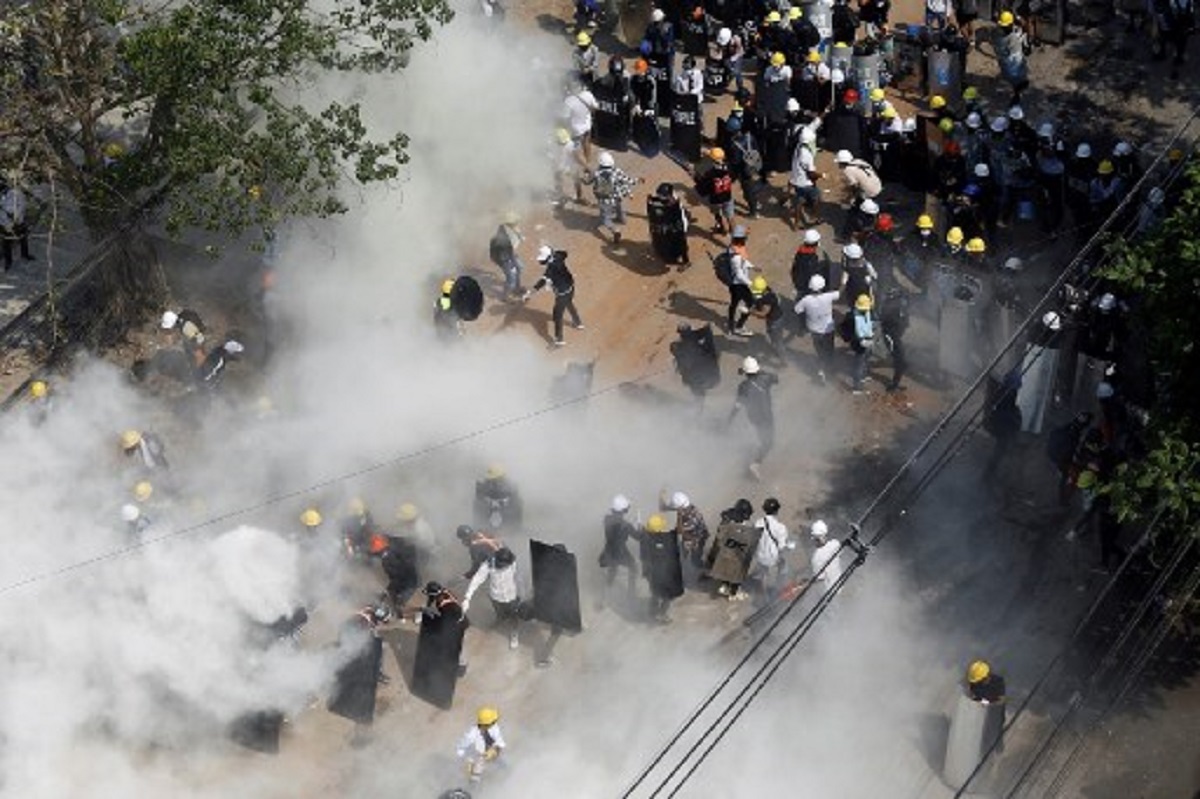 Protesters react as they engulfed by tear gas fired by police, and as other demonstrators let off fire extinguishers, during a demonstration against the military coup in Yangon, Myanmar, on 6 March 2021. Picture: AFP.

Anti-coup demonstrators returned to the streets of Myanmar Saturday, a day after a United Nations envoy urged the Security Council to hear the nation’s “desperate pleas” and take swift action to restore democracy.

The country has been in turmoil since a 1 February putsch ousted civilian leader Aung San Suu Kyi from power, triggering a massive uprising from hundreds of thousands angered to be returned to military rule.

Security forces have escalated an increasingly brutal crackdown on demonstrators – killing more than 50 people since the coup – but protesters rallied again on Saturday.

From the dusty roads of northern Lashio – where young protesters stared down police behind homemade shields – to central Loikaw city in view of Myanmar’s eastern mountains, hundreds continued to march for democracy.

“Our revolution must win,” chanted protesters in Loikaw, who included civil servants like teachers in their green and white uniforms.

The country’s vital sectors have been crippled by an ongoing “Civil Disobedience Movement” – a campaign urging civil servants to boycott working under a military regime.

The impact has been felt on every level of the country, with shuttered hospitals, empty ministry offices, and banks unable to operate.

On Saturday, state-run media announced that if civil servants continue to boycott work, “they will be fired” with immediate effect from 8 March.

But protesters in Myanmar’s commercial hub continued to defy authorities, gathering especially in San Chaung – a once-buzzing township with cafes, restaurants and bars that has emerged as a hotspot for unrest.

Activist Maung Saungkha said the movement will persist – even as the security forces continue to step up their enforcement tactics – as many remember the repression under the previous junta regime.

“In our past revolutions, we never won… this time we must fight to win,” he told AFP.UN

“We must fight together with the younger generation to get victory.”

‘The repression must stop’

The generals have shown no sign of heeding calls for restraint despite mounting international pressure, including targeted sanctions by Western powers.

The United Nations Security Council on Friday heard from UN special envoy on Myanmar, Christine Schraner Burgener, who warned against any moves to grant legitimacy to the junta.

“The hope they have placed in the United Nations and its membership is waning and I have heard directly the desperate pleas – from mothers, students and the elderly,” she said.

“Your unity is needed more than ever on Myanmar… The repression must stop.”

But diplomats say it was unlikely that the Security Council would approve any international measures against the junta, and the session ended without any statement.

Condemnation against Myanmar’s military has largely been unanimous, but veto-wielding China is still regarded as a key obstacle in getting consensus.

China’s ambassador, Zhang Jun, said his country did not want to see instability in Myanmar.

But “the messages and measures of the international community should be conducive for the parties in Myanmar to bridge differences and resolve problems,” he told reporters.

The meeting came at the end of a day that saw one anti-coup protester shot in the neck in Mandalay, Myanmar’s second-largest city.

His death adds to a toll of at least 55, according to the United Nations, with at least 38 killed on Wednesday in the bloodiest day of the protests so far.

Memorials were held Friday for three killed in Yangon’s North Okkalapa, with hundreds of mourners holding up a three-finger salute as their coffins are carried through the funeral home.

The coffins of Arkar Moe, Zwee Htet Soe and Phoe Chit were draped with the signature red flag of Suu Kyi’s National League for Democracy Party.

The Nobel laureate has not been publicly seen since she was detained on 1 February.

Her party won the November elections by a landslide, but the military alleged widespread electoral fraud, justifying it as a reason for seizing power.