The marking of China’s founding follows the 100-year anniversary of the Communist Party of China, celebrated earlier this year. 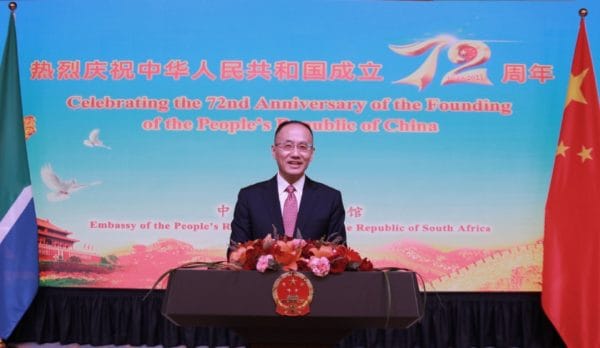 Chinese ambassador to South Africa, Chen Xiaodong, delivering a keynote address on the People's Republic of China's celebration of 72 years since its founding. Picture: Supplied

Amid a trail of congratulatory messages from various countries toward the People’s Republic of China on Tuesday celebrating 72 years of its founding, Finance Minister Enoch Godongwana has lauded the Asian economic giant for its continued partnership with South Africa.

Addressing a virtual ceremony hosted by the Chinese embassy, Godongwana expressed optimism about the strengthening of the social and economic partnership with China – post the Covid pandemic.

“The SA-China strategic partnership continues to weather the storm of the unusual situation presented by the Covid pandemic.

“Our partnership has continued to expand despite the limitations placed on the physical engagement by the pandemic, which has led to socio-economic dilemmas internationally,” said Godongwana.

Government and the people of South Africa joined China “to pay tribute to the founding of the People’s Republic of China, which during these unprecedented times has proven to be resilient and more determined to chart a new path towards economic growth and development – achieving inclusive prosperity for its people”.

Said Godongwana: “Both China and SA have a lot of looking forward to, in terms of expanding our strategic partnership.

“Already, there are signs that our partnership has assumed a comprehensive nature, while solidifying our warm and brotherly relationship based on an understanding of cooperation and cultural affinity – promoting prosperity and economic growth in our respective countries.

“We need to revive this partnership so that our economic growth is accelerated post-Covid and mitigate the socio-economic damage done by the pandemic.”

In his keynote address, Chinese ambassador to South Africa Chen Xiaodong thanked South African leaders “for your long-standing active support for the development of China-South Africa and China-Africa relations”.

The marking of China’s founding followed the 100-year anniversary of the Communist Party of China (CPC) celebrated earlier this year.

CPC general secretary and China President Xi Jinping declared at the grand gathering celebrating the 100th anniversary of the founding of the CPC that China had fulfilled the first centenary goal.

Xiaodong said China has built “a moderately prosperous society in all respects and brought about a historic resolution to the problem of absolute poverty”.

“We are moving forward with vigor toward the second centenary goal of building China into a great modern socialist country in all respects.

“Common prosperity is an important feature of China’s modernisation.

“The CPC has always adhered to a people-centered development philosophy.

“We work to make sure that the fruits of development benefit all in a fair manner and to promote common prosperity with high-quality development,” said Xiaodong.

He said: “Even as the Covid pandemic intensified the sluggish world recovery, China’s economy continued to maintain its growth momentum.

“It has become the anchor and the driving force for global economic recovery.

“In the first eight months of this year, China’s total foreign trade value reached $3.83 trillion – up by 34.2% year-on-year. This is a record-high growth for the same period in history.

Xiaodong described as remarkable the achievements the country had made in science and technology.

“After 90 days of work and life in the space station, the Taikonauts returned to earth safe and sound 10 days ago.

“These milestone major achievements one after another show that China is making important breakthroughs in key and core technologies, which will help us achieve a high level of self-reliance on this front.

“This year, China worked hard for a community with a shared future with the world and we showed extraordinary commitment to addressing global challenges,” he said.

Xiaodong said Jinping put forward four proposals in his statement at the general debate of the 76th session of the United Nations General Assembly, “which point the way forward for the world and demonstrate the wisdom and global vision of a major country’s leader”.

Explained Xiaodong: “Firstly, we must beat Covid-19 and win this decisive fight – crucial to the future of humanity.

“China will strive to provide a total of two billion doses of vaccines to the world by the end of this year.

“In addition to donating $100 million to Covax, China will donate 100 million doses of vaccines to other developing countries in the course of this year.

“China will continue to support and engage in global science-based origin-tracing and stands firmly opposed to political maneuvering in whatever form.

“Secondly, we must revitalise the economy and pursue more robust, greener and more balanced global development.

“China will strive to peak carbon dioxide emissions before 2030 and achieve carbon neutrality before 2060.

“We will step up support for other developing countries in developing green and low-carbon energy and will not build new coal-fired power projects abroad.

“Once again, China has pledged an additional $3 billion of international assistance in the next three years to support developing countries in responding to Covid-19 – promoting economic and social recovery.

“Thirdly, we must strengthen solidarity and promote mutual respect and win-win cooperation in conducting international relations.

“We need to advocate the common values of humanity, and reject the practice of forming small circles or zero-sum games.

“We need to pursue dialogue and inclusiveness over confrontation and exclusion.

“We need to build a new type of international relations based on mutual respect, equity, justice and win-win cooperation, and do the best we can to expand the convergence of our interests and achieve the biggest synergy possible.

Fourthly, we must improve global governance and practice true multilateralism.”