More than 100 requests for the impeachment of President Jair Bolsonaro have been filed with the Chamber of Deputies. 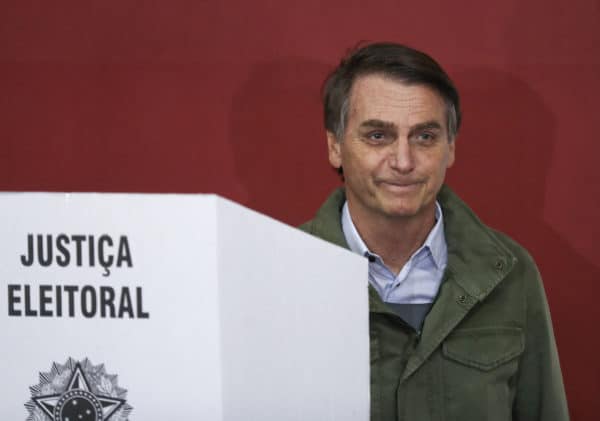 (FILES) In this file photo taken on October 28, 2018 Brazil's right-wing presidential candidate for the Social Liberal Party (PSL), Jair Bolsonaro votes during runoff elections, in Rio de Janeiro, Brazil. - A year before the elections in Brazil, former leftist president Luiz Inácio Lula da Silva is the favourite against Jair Bolsonaro, but analysts do not rule out a bumpy ride and even a tense outcome like this year's elections in the United States. (Photo by RICARDO MORAES / POOL / AFP)

Brazilians took to the streets around the country Saturday, once again calling for the ouster of unpopular President Jair Bolsonaro.

Large crowds were expected in Rio de Janeiro, Sao Paulo, Brasilia and more than 160 other towns and cities as part of the “Bolsonaro Out National Campaign,” which is backed by a dozen left-wing political parties and labor groups.

Among other issues, the right-wing president has come under stinging criticism for his handling of the pandemic, which has claimed nearly 600,000 lives here.

Hundreds of people marched through the central Rio de Janeiro neighborhood of Candelaria, shouting “Bolsonaro out!” which was also emblazoned on several large banners.

“We’re going to get him out. The hope of the people here in the streets is to put pressure on legislators so that they call for impeachment,” 69-year-old retired professor Elizabeth Simoes told AFP.

More than 100 requests for the impeachment of Bolsonaro have been filed with the Chamber of Deputies, but its leader Arthur Lira, a government ally, has refused to take any of them up.

The Supreme Court has ordered several investigations into Bolsonaro and his aides, including for spreading false information.

Red flags of the Worker’s Party of former president Luiz Inacio Lula da Silva, or Lula, could be seen Saturday, along with Brazilian flags and the signs of several other left-wing and centrist parties often seen at protests against the far-right Bolsonaro.

But backers of the president have also made themselves known in recent weeks, as around 125,000 of them gathered in Brasilia and Sao Paulo September 7 in a show of support for Bolsonaro.

A mid-September opinion poll by the Datafolha Institute found that Bolsonaro has 26 percent support compared with Lula’s 44 percent, just on year ahead of the presidential vote.