If you're based in South Africa, November’s full Beaver Moon will shine bright on Friday night, 19 November, in the constellation Aries. 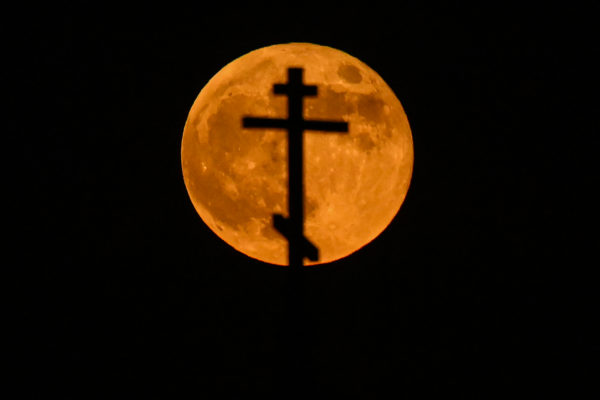 A Super Blood Moon rises over the cross on top of an Orthodox church in the city of Rossosh', Voronezh region in May 2021. Photo: AFP/Kirill Kudryavtsev

The full Beaver Moon – as November’s plenilune is known – is also a blood moon, and therefore expected to shine with an eerie glow tonight.

What is a blood moon?

A blood moon coincides with a partial lunar eclipse, an event which turns the moon red, as the sunlight reaching the moon has to pass through Earth’s atmosphere first.

“It’s as if all the world’s sunrises and sunsets are projected onto the moon,” said NASA’s Molly Wasser.

Why is called a ‘Beaver Moon’?

According to the 1930s Maine Farmers Almanac, the names of full moons are derived from both colonists and Native American tribes, specifically Algonquin-speaking tribes.

Beavers – as observed in the northern hemisphere – become particularly active during this time of year as they build their winter dams in preparation for the cold season.

Thus, the November moon’s name refers to the time of the year when beavers prepare for winter. It’s also known as the Frost Moon or Geese-Going Moon.

The significance of November’s plenilune

According to NASA, the full moon (purnima) in the month of Kartik – ie, Kartik Purnima – is celebrated by Hindus, Jains, and Sikhs, for various different reasons.

The Beaver Moon also corresponds with the Loy Krathong in Thailand, and the Boun That Luang Festival in Laos, Southeast Asia.

Loy Krathong is an annual festival in which floating decorative rafts (krathong) are released into rivers and ponds during the evening of the full moon of the 12th Thai lunar month.

The Boun That Luang Festival is a three-day celebration of the oldest and most highly acclaimed of the Buddhist temples in Laos, Pha That Luang, located in the capital city, Vientiane.

When was the Full Beaver Moon?

This month, the moment when the Beaver Moon is exactly 180 degrees opposite the Sun in ecliptic longitude falls on Friday, 19 November at 10:59am South African Standard Time (SAST).

Yes, we realise it is during daylight hours; but we’d still be able to bask in its glory tonight and see the full effect until sunrise on Saturday morning.

And thankfully for all the skywatchers in the southern hemisphere, a full moon is usually visible for around three days.

When is the next full moon?

The next full moon – known as the Cold Moon – appears on 18 December. It’s named after the frosty winter temperatures sweeping across the northern hemisphere during this time of the year.

It coincides with the winter solstice, it is thus also called the Long Nights Moon.

As per Time And Date, “December is the month when winter truly begins in the Northern Hemisphere“

Most of the ancient Full Moon names are related to the low temperatures and darkness of December. The most common name is the Cold Moon, while another is Long Night Moon.