There have been a flurry of accusations about Downing Street parties held during lockdowns in 2020 which have dogged Johnson since late last year, sparking public revulsion. 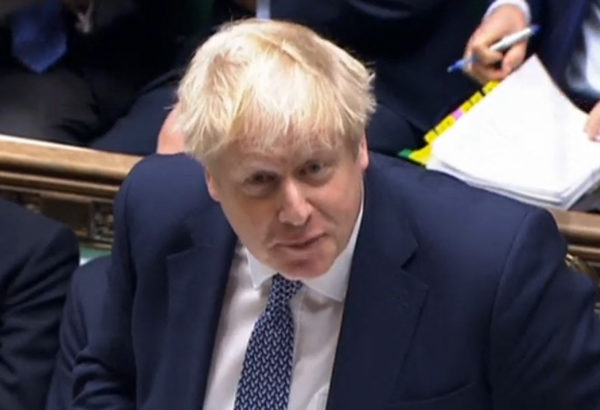 British Prime Minister Boris Johnson on Wednesday said sorry after admitting he attended a lockdown-breaching party in Downing Street, but deflected opposition demands for his resignation. (Photo by PRU / AFP) /

UK Prime Minister Boris Johnson Wednesday apologised for attending a lockdown-breaching party held in his Downing Street garden, but deflected calls to resign as the opposition leader called him a “man without shame”.

After days of dismal headlines and collapsing poll ratings, Johnson said he regarded the newly revealed boozy get-together in May 2020 as a work event for Downing Street staff.

He conceded he did not appreciate how the event would look to millions of Britons who were respecting Covid rules, even missing out on farewells to dying relatives.

“And to them and to this House I offer my heartfelt apologies,” Johnson told a stormy session of questions in the House of Commons.

“With hindsight I should have sent everyone back inside. I should have found some other way to thank them (his staff),” he added, admitting he had been present for about 25 minutes.

Keir Starmer, leader of the main opposition Labour party, said the public believed Johnson was “lying through his teeth”.

“The only question is will the British public kick him out, will his party kick him out, or will he do the decent thing and resign?

“The prime minister’s a man without shame,” Starmer added, for the first time joining other opposition leaders in demanding Johnson’s ouster.

Johnson — who was fired twice in previous jobs for lying to his bosses — had managed to weather one of the world’s worst Covid death tolls thanks to a successful mass vaccination campaign, and his record as the leader who effected Britain’s Brexit withdrawal from the European Union.

But Hannah Brady, spokesperson for the pressure group Covid-19 Bereaved Families for Justice, said: “The prime minister’s lies have finally caught up with him.

“Not content with kicking bereaved families like mine in the teeth by breaking the rules he set and then lying to us about it, he’s now taking the British public for fools by pretending he ‘didn’t know it was a party’.”

Even some on his own side want Johnson to go, but in response to Starmer, he urged all sides to await the findings of an internal inquiry he has commissioned by a senior civil servant.

“He is not resigning,” Johnson’s press secretary told reporters.

There have been a flurry of accusations about Downing Street parties held during lockdowns in 2020 which have dogged Johnson since late last year, sparking public revulsion.

Lisa Wilkie was forced to film her brother dying of Covid in intensive care in May 2020, because their mother was not allowed to visit the hospital under the restrictions.

“People died sticking to the rules, and they broke those rules to have a bottle of wine,” a tearful Wilkie told the BBC.

Johnson’s apology followed the same pattern as previous allegations of Downing Street parties during lockdowns in 2020: denials or stonewalling, followed by a mea culpa in the face of documentary proof.

Senior Conservative MP Roger Gale said it was now clear that Johnson had misled parliament and was, politically, a “dead man walking”.

“Unfortunately what the prime minister has said today leaves people like me in an impossible situation,” he told the BBC, warning that Tory backbenchers could now hold a no-confidence vote.

Nigel Mills, another Conservative lawmaker, said: “If the prime minister knowingly attended a party I don’t see how he can survive, having accepted resignations for far less.”

The prime minister was rocked when the email was leaked late Monday in which a senior aide invited more than 100 colleagues to the event on May 20, 2020, encouraging them to “bring your own booze”.

The event occurred when the government was ordering members of the public not to meet, even outdoors, and tight restrictions were in place on social mixing, including at funerals.

The party was held just over a month after Johnson had come out of intensive care with Covid, and some reports said it was staged with his full knowledge as a “welcome back” event.

Police at the time were fining people breaching the Covid rules, and had the option to prosecute repeat or egregious offenders.

Johnson could yet face a more serious, criminal probe by London’s Metropolitan Police. Even the front pages of newspapers that normally back him and the Tories were damning.

“It’s my party and I’ll lie low if I want to,” mocked The Sun tabloid.