Putting them on the pavement was not an option as he was afraid someone would take them. 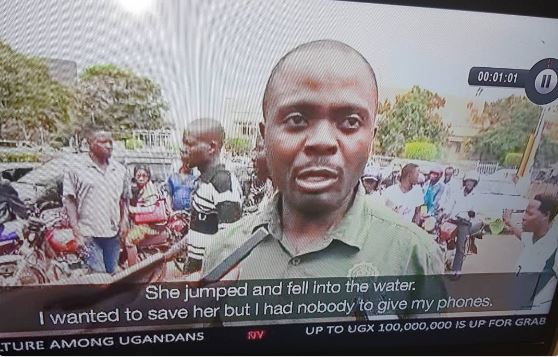 A man from Uganda has been trending on Twitter, receiving criticism for apparently just watching a woman drown when he could have done something to save her. A TV screenshot of the man being interviewed shows subtitles on the screen of the man saying: “She jumped and fell into the water. I wanted to save her but I had nobody to give my phones.”

According to the Twitter user who shared the screenshot, the woman drowned while allegedly running away from agency members who did not want her to sell handkerchiefs on the streets.

This man watched a woman drown. He said he could swim & thought of jumping into the water to save her. But he had his phones in his pockets. pic.twitter.com/qbKsI2vYf5

The man has divided Twitter, with some saying he was just being honest, while some alleged he had compared human life to his phones.

“I watched the clip on the news and couldn’t believe my ears. So sad how we value material possessions more than human life. Gosh, phones,” wrote one angry Twitter user.

Some said he did the right thing as he too would have drowned because he wasn’t a trained lifeguard. Had he jumped in, he would have died too, they argued.

Check out the rest of the comments below:

Poverty of the Mind and the Pocket. ????

He is just being Frank! That's how Ugandans have been pushed to the wall. She was hawking hankies, capital 20.000, died trying to save it.

These agencies have become insensitive and beastly. Can determine when to take ones life.

Don't judge…… only ask what you would have done if it were you in his place. Honestly.

How could he voice a thought so base! But I wonder:isn't it in all of us to observe, to not act. Maybe we're repelled by our own reflection????

I'm appalled tbh. What have humans turned into?

This has made my day, he would have just shut up

I see most of these commenting would do the same. Only that they wouldn't open their mouth.

That's honesty x2. I think many would do the same, but few would be as honest. Man has been enslaved by a simple gadget, phone.

I don't get y people r angry with this man. A lot of u c brutality in Kampala daily and just look away. How different is this man?

Were does he even get the guts to open his mouth en say such nosence. How much were his phns. Were is the spirit of Obuntu/togetherness

That's a tricky one! His phones would have disappeared the moment he put them out to save the poor lady. And going down with them ????????

Too bad, he can't be charged of negligence. He's not a Lifeguard

Not everyone that can swim can save a life, we might end up with two dead bodies in the water.