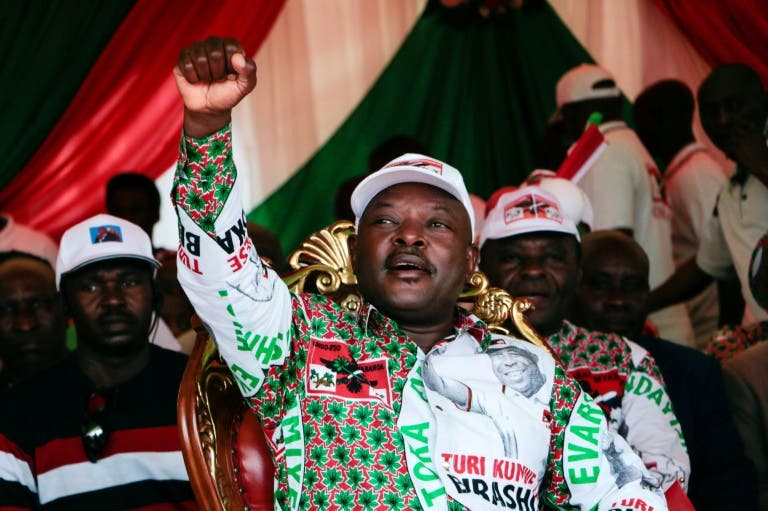 Nkurunziza, pictured on the election campaign trail on May 16. AFP/File/-

African Union chair President Cyril Ramaphosa has sent condolences to the people of Burundi after the passing of their outgoing president, Pierre Nkurunziza.

Ramaphosa called on Burundians to maintain calm and peace following Nkurunziza’s death, and in the aftermath of the recently concluded presidential, legislative and municipal elections.

An evangelical who believed he was chosen by God to rule the East African nation, Nkurunziza came to power in 2005, when he was selected by Parliament.

“Burundi and all of Africa have lost a leader who was devoted to people-centred sustainable development, self-reliance, the sovereignty of his people and country, as well as peace on the continent.

“It was under the leadership of President Nkurunziza that Burundi became one of the major troop-contributing countries in the African Union Mission in Somalia. Burundi also deployed troops in the Central African Republic,” Ramaphosa said in a statement.

The South African president recalled what he said were sound bilateral relations between South Africa and Burundi, under which South Africa played a key role in the AU-led Burundi peace process, which led to the signing of the Arusha Peace Accords in 2000.

“A memorable last state visit undertaken by President Nkurunziza to South Africa was in November 2014, at which a number of bilateral agreements were signed,” Ramaphosa said.

Nkurunziza’s controversial and ultimately successful bid for a third term in 2015 plunged the country into crisis, AFP reported.

Violence left at least 1 200 people dead, displaced hundreds of thousands and the authorities carried out a sustained crackdown on the opposition and media.

Nkurunziza will be succeeded by Evariste Ndayishimiye, who secured a seven-year term as president – a result confirmed by the Constitutional Court last Thursday. Ndayishimiye was due to be sworn in, in August.