How Zuma government drives everyone into WMC’s welcoming arms

If 'white monopoly capital' can be read as 'private sector', nothing demonstrates the ironies better than the current Sassa debacle. 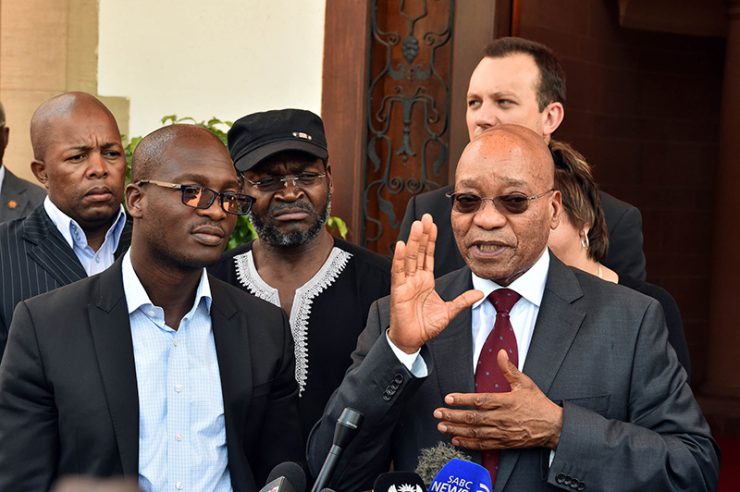 Oh, the irony. In a year that President Zuma chose to earmark as one of “radical economic transformation” during his state of the nation address, the first serious test of whether his administration can effect anything like this lofty ambition has all but demonstrated the complete opposite.

Despite the enormous opportunity afforded to the department of social development to secure the payment of 17 million grants through the SA Social Security Agency (Sassa) and to introduce a combination of interested and capable parties to partake in the project, if it wanted to stay outside the direct purview of Sassa – specifically female entrepreneurs and black economic empowerment partners – the inaction and incompetence of government means the delivery of this most vital of duties again falls into the hands of white monopoly capital (WMC).

Let’s make no mistake, without the involvement of Net1 subsidiary Cash Paymaster Services (CPS), there is no way this government can pay social grants without the risk of massive disruptions come 1 April. This means that Net1 founder, chairman and CEO Serge Belamant holds all the cards as the terms of the new contract with Sassa are negotiated.

Belamant knows this. And Belamant – given the urgency and lack of alternatives the government has at its disposal – will dictate the price and terms of the contract should the Constitutional Court give its blessing. Key in these negotiations will be the principle of whether CPS can make deductions prior to paying out grants – a position Sassa is stating on record that it will not tolerate or agree to.

Let’s see who wins that argument.

The information that came out of the press conference held on Sunday by social development minister Bathabile Dlamini, which descended into a farce, was mostly unclear and contradictory. The new contract will have to be for an extended term given the fact that Sassa looks no closer to formulating a new plan to deliver the grants than it did three years ago. The picture below is an extract of the detail the minister could provide on the future and evolution of social grants. 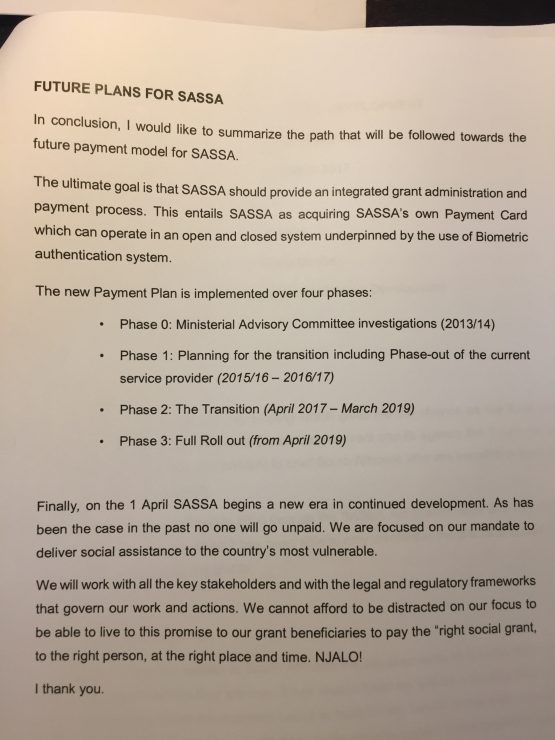 When we cast our eyes wider from the challenges facing Sassa, we see a phenomenon that exists thoughout our society. Curro schools (WMC) benefit from the poor and deteriorating standard of our primary and secondary education system. Private healthcare groups such as Netcare and Life (WMC) fill the gap of an overburdened and deteriorating public healthcare system. The more intense cadre deployment becomes at state-owned entities such as Eskom, the more consumers elect to go off the grid, compounding the already dire finances of the utility. And policy making has been ceded to the courts.

The local government elections should have been a reminder to the ruling ANC that at some point democracy operates as a meritocracy – which means that, if you don’t deliver, you’re out. But there appears to be very little evidence that shows whether the ANC has seriously realised this.

So while the president and his acolytes continue to thrash against WMC, in many ways it can be seen as an attack on the private sector. But in the absence of competent government intervention, it presents the only functioning alternative, as this whole sorry debacle has so visually been demonstrated.

Sassa payment dates: When to collect the R350 SRD grant in December
1 day ago
1 day ago

Sassa payment dates: When to collect the R350 SRD grant in December
1 day ago
1 day ago