The information about data costs is fake news, says FMF. 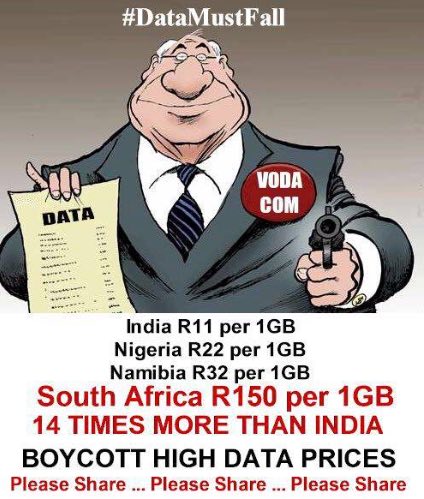 A well-known image circulating on social media that the FMF says is an example of fake news.

#DataMustFall campaigners are guilty of cherry-picking to make a point that is set to undermine one of post-apartheid’s few success stories. (Worldwide data prices have fallen considerably and look set to continue doing so. It is a fantastic good news story – especially for the poor!)

Yes, in India, a small regional provider, for a limited period of time, offered a loss-leader special deal at R11 per gig. Comparing this isolated cheapest option to South Africa’s most expensive mainstream gig is disingenuous at best. The cheapest recent South African price was R8 per gig.

There are too many variables to compare prices across countries accurately or honestly. Prices vary depending on whether providers are regional or national, whether packages are once-off or contract, whether data is in or out of bundle.

But that’s not all. Prices are influenced by country size, population density, coverage, technology, speed, geography, regulations, subsidies, licensing fees, spectrum availability, quality and level of development. In South Africa, loadshedding and crime add to the prices charged consumers, as does restrictive spectrum allocation. In addition, the government requires mobile network operators to provide free or heavily-discounted data to schools, hospitals, clinics, universities and FETs. There is no such thing as a free lunch – someone has to pay for “free” data. That someone is you, the paying consumer.

Be warned: Calls for “free” data will raise your data prices. Are you ready to pretend data is a human right? What’s next? Something you supply?