Thank you, Busisiwe, we must applaud your latest bungle

She has stumbled from one inept and legally controversial finding to another, but has now surely given enough cause to get rid of her. 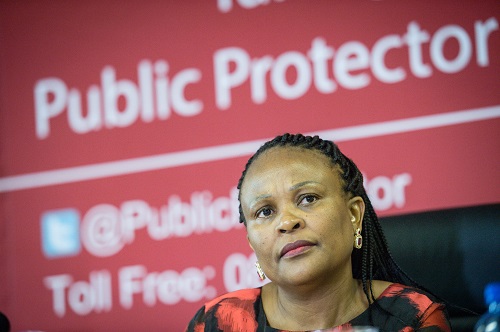 Let’s applaud the latest report from the public protector. In a harshly punitive finding, she has declared that Western Cape Premier Helen Zille violated the constitution with “an incitement to imminent violence”.

The speaker of the Western Cape legislature must act against Zille within 30 days.

Advocate Busisiwe Mkhwebane’s report should be cheered not because it is correct, but because it is so ludicrous in law and so maliciously partisan that with this bizarre finding, she may at last have gone too far, exhausting her already waning parliamentary support.

Mkhwebane’s 20-month tenure has been a disaster. She has stumbled from one inept and legally controversial finding to another, but has now reached what is surely the nadir of her lacklustre career.

Her exit must be imminent.

If she goes, the career-crushing blow will have come from a simple tweet. After a visit to Singapore, Zille last year tweeted that not every aspect of colonialism had been entirely bad.

“Think of our independent judiciary, transport infrastructure, piped water etc,” she wrote. It’s a statement that, while politically unpopular, is academically unremarkable.

But it was also manna for political agents provocateur and trolls. There was a firestorm of social media outrage.

The substance of Mkhwebane’s finding – which appropriately enough has been scanned on to the public protector website upside down – is thinner and more transparent than the gruel in a Dickensian alms-house. The poverty of intellect is cruelly summed up by constitutional law expert Pierre de Vos.

The report is “so legally misguided that it is difficult to believe that a qualified lawyer wrote it in good faith … She has little understanding of her own powers and lacks even a very basic knowledge of the constitution.”

Mkhwebane’s finding is so strange as to be funny. Less amusing is that her performance as public protector, replacing the respected Thuli Madonsela, has been consistently woeful.

Of her 50 investigations, 10 went to judicial review. In reversing her finding on the bailout of Bankorp, the high court savaged her for lacking impartiality.

“She did not have regard thereto that her office requires her to be objective, honest and to deal with matters according to the law and that a higher standard is expected of her.”

To expect a “higher standard” is a forlorn hope. It is instructive to revisit her curriculum vitae. It paints, at best, a picture of an unremarkable civil servant.

Mkhwebane has never been anything more than an ANC shill, contorting her “investigations” to fit the findings into a template pleasing to her political masters. She was shoehorned into the job by the ANC – with the complicity of the EFF, who voted for her simply because of her race – to ease the stings inflicted on the then president Jacob Zuma and his corrupt cronies by her principled predecessor.

The usefulness of Mkhwebane to the Zuma ANC is now, under President Cyril Ramaphosa, a career disadvantage. And her professional shortcomings and political biases are now so obvious as to be cringingly embarrassing.

Mkhwebane wants to employ a “special adviser”, at an annual salary of R1.2 million, to replace the voluntary panel that currently assists. Perhaps the appointee could start by advising Mkhwebane on drafting her letter of resignation.