Do not pity the dejected old man in the dock

Load shedding by Eskom is back to haunt the country and remind everyone that the forlorn-looking old man in the dock deserves no sympathy. 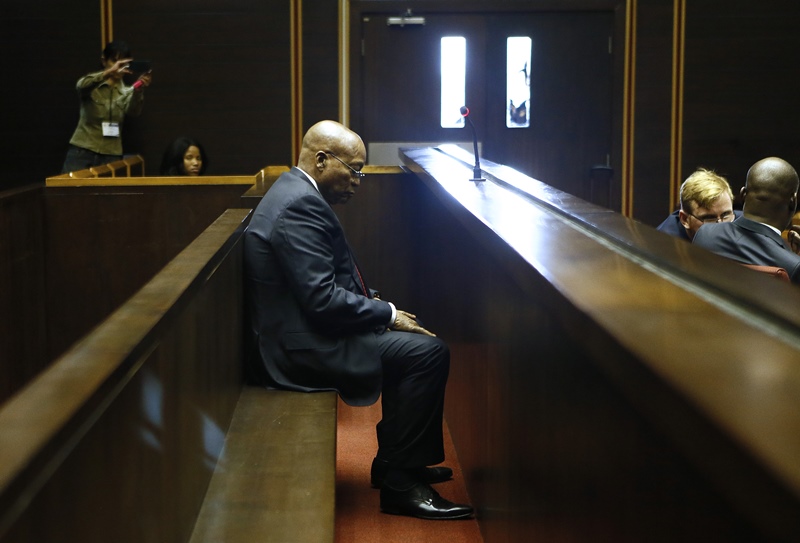 Former South African president Jacob Zuma sits in the dock of the High Court of Pietermaritzburg on July 27, 2018 for his hearing over 16 corruption charges. Picture: AFP PHOTO

There is a picture of an almost dejected and forlorn Jacob Zuma sitting in the dock during his latest appearance in court to face the corruption charges that he has managed to legally avoid for more than a decade.

It’s a picture that is enough to elicit a bout of sympathy for a man who is in his late seventies. A man who should be enjoying his retirement years after almost a decade as president of the country.

Yet, it has come to this. He is having his day in court, albeit with delays that are of his own making.

But any sympathy towards the former president is misplaced.

People need to be very careful about misplaced sympathy because it is on that card that he rode into the Union Buildings.

He milked the supposed political victimisation at the hands of former president Thabo Mbeki to get the ANC faithful to feel sorry enough for him to get the presidency.

Little did they know they had set the country on a path that was so destructive, future generations of South Africans would feel the effects.

Load shedding by Eskom is back to haunt the country and remind everyone that the forlorn-looking old man in the dock deserves no sympathy.

Just as the parliamentary public enterprises committee into state capture at Eskom completed and adopted its report, the untold damage done to the national electricity supplier gets practically translated from being just a subject of parliamentary debates into the lives of South Africans.

Not only will citizens spend the festive period in the dark, but some will face a bleak future soon because some companies will be forced to scale down production due to the inconsistent nature of the electricity supply.

Eskom has already announced that cable theft has increased because thieves target those periods when electricity is off due to load shedding.

All this can be traced back to the leadership of that forlorn-looking man sitting in the dock.

Before the Commission of Inquiry into State Capture under Deputy Chief Justice Raymond Zondo was set up, this parliamentary committee regaled the nation with parliamentary interviews that put Malusi Gigaba, Lynne Brown, Brian Molefe and a whole host of other Eskom board members and executives in the spotlight.

The Eskom officials were portrayed as people who had been put in place at the power utility to carry out the mandate of enriching the Gupta family and their associates by carrying out unlawful acts while in the employ of the state-owned enterprise.

And all that became possible because of that forlorn-looking old man in the dock.

Outside court, he took to the stage and explained to his supporters why he thought the corruption charges against him should be dropped: the case had gone on for more than 10 years, which was too long.

What he never tells his supporters is that he is responsible for every single delay of the trial in those more than 10 years through his Stalingrad approach of challenging every legal tactic and manoeuvre by the state, and kicking for touch at every opportunity without challenging the actual facts of the case.

It comes as no surprise that the strategy outside the courtroom remains much the same for Zuma as it was in the days leading up to his election as president: elicit sympathy from his supporters by claiming victimisation.

And Carl Niehaus is playing the perfect role to the gallery with empty threats (in military regalia) for those lying to “tarnish the image of the people’s president”.

It is such a pity then that this “people’s president” only caused his people suffering.