In South Africa the media, the 'watchdog' of democracy, seems to growl only when its own tail is stepped upon. 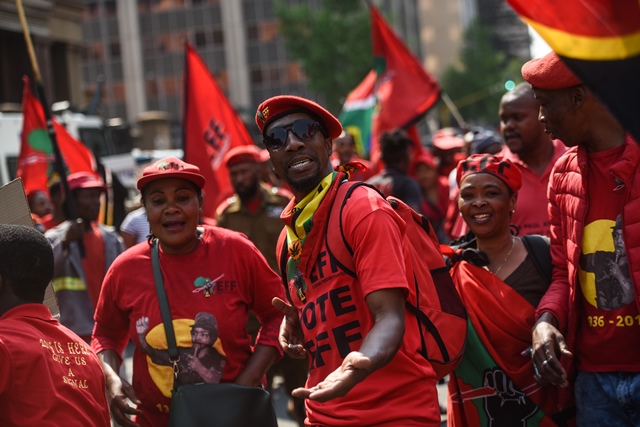 EFF members are seen outside the North Gauteng High Court in Pretoria where Julius Malema applied to the High Court to declare the ‘apartheid law' on the Riotous Assemblies Act illegal in post-apartheid South Africa, 20 September 2018, Pretoria. Picture: Jacques Nelles

The general election is exactly two months away. But for the EFF it’s been just another week in politics, dispensing the usual menace and mayhem.

On Tuesday, EFF leader Julius Malema “exposes” journalist Karima Brown as a likely “intelligence operative”, spying on his party. He releases her cell number onto social media, fully knowing what will happen next.

The EFF rabble do not disappoint Das Führer. They unleash a barrage of filthy abuse and make pornographically explicit threats of assault, torture, rape and murder. There is no word of disapproval from the EFF leadership.

Radiating innocence, Malema says people who threaten violence should be jailed, even if they are EFF members, which he – squinting earnestly at the television cameras – very much doubts.

It’s vintage Malema. Slip the leash from the hounds of hell and once they have done their worst, express bafflement and fake contrition.

Despite the media frenzy about Brown, none of this is new. It happens repeatedly and endlessly.

On Monday, prior to the Brown incident, the Free State High Court interdicted six EFF councillors from assaulting the (black) municipal manager, disrupting job interviews and pelting the other councillors with dangerous objects.

Criminal charges were laid but, if past history is any indicator, nothing is likely to come of these. Only Volksblad reported the matter and News24 didn’t even bother to translate the report into English for their website.

Here lies the nub of the problem. It’s not just that the EFF’s fascist thugs threaten us with beatings, rape and genocide.

That is the nature of the EFF beast. The real problem is that the EFF has been rampaging with impunity. There is not a single state institution – not the police, the Human Rights Commission, parliament, the Independent Electoral Commission, nor the ANC government itself – that has been willing to act to stop the EFF’s undemocratic and illegal behaviour.

According to Daily Maverick, in the past year there have been at least 10 attacks by the EFF on journalists. None has got to court and in a number of incidents, the police have not yet bothered to take statements.

Last year, the SA National Editor’s Forum (Sanef) approached the Equality Court for an interdict ordering the EFF to refrain from inciting violence against journalists, as well as intimidatory “hate speech”. The application has still not been dealt with.

The SA Human Rights Commission has been characteristically spineless. There have been scores of formal complaints against the EFF and its leader, some dating back three years, but with no apparent progress.

Brown says she intends complaining to the Independent Electoral Commission. “We need to ask the IEC how such a party can be on the ballot box… That’s the fundamental question.”

Brown’s fundamental question certainly deserves to be addressed but a pity that it has taken so long for the media to ask it.

Let’s not gloss over the fact that the sudden uptick in media criticism of the EFF corresponds with the EFF escalating its attacks on journalists.

When the EFF flirted with white genocide and the extermination of farmers there were no urgent demands from the media for police, parliamentary, IEC or government intervention.

Aside from some half-hearted disapproving clucking, the media did pretty much nothing.

In SA the media, the “watchdog” of democracy, seems to growl only when its own tail is stepped upon.

EFF disrupted Ramaphosa and Zille's plan to give hung metros to ANC, says Malema
22 hours ago
22 hours ago

EFF disrupted Ramaphosa and Zille's plan to give hung metros to ANC, says Malema
22 hours ago
22 hours ago