Our leaders fiddle while SA burns

We cannot look to Cele for answers but at least he appreciates the gravity. Can the same be said for President Cyril Ramaphosa? 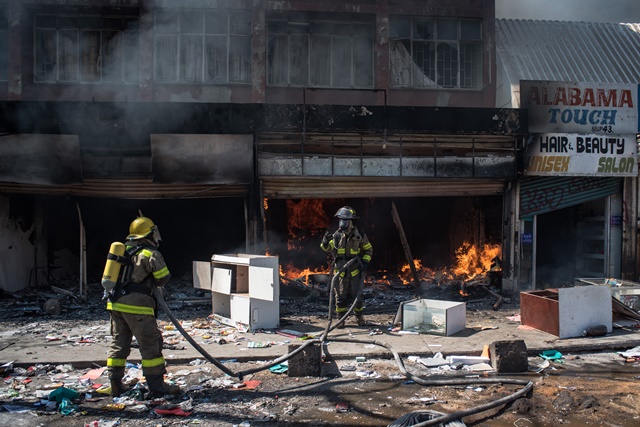 Firemen are seen outside some of the foreign owned shops that were set alight after being looted by protestors in the Pretoria CBD, 28 August 2019. Picture: Jacques Nelles

Nero did not fiddle while Rome burned. Nothing resembling a fiddle was developed until 1,000 years after the Eternal City’s great fire of AD64.

But the myth captures the idea of ineffectual leadership ignoring crisis.

What crisis? Police Minister Bheki Cele described Monday’s looting as a national emergency. Even if the police were fully equipped and well trained, they would not be able to deal with what is unravelling.

Following previous skirmishes in Johannesburg, and the SA Police Service’s inability to curtail gang violence on the Cape Flats, the thin blue line looks flaky. Can we rely on the police or the SA National Defence Force to protect us indefinitely?

Levels of desperation look different across class lines. For some it’s selling up in a hurry and leaving SA before Armageddon (“I’m a geddin’ outa here”?).

Indeed “For sale” signs, a stagnant property market, and emigration are middle-class examples of our Hydra-headed troubles. Rich, poor, we’re in this together. Some may party while CBDs and townships erupt but each of us has some awareness of underlying problems.

We cannot look to Cele for answers but at least he appreciates the gravity. Can the same be said for President Cyril Ramaphosa? At the time of writing, no.

In fact there’s a petition circulating, urging Ramaphosa to “do something. Today. Now”.

Realistically, Ramaphosa is not going to do anything that will suddenly fix everything. And if a grand gesture had come from acting president David Mabuza in Ramaphosa’s absence, it would have lacked credibility.

However, the nation would no doubt appreciate “concomitant action”, to repeat Ramaphosa’s unfortunate choice of words in the build-up to the 2012 Marikana massacre.

Rule of law must prevail. Whatever the appropriate short-term response to rioting, solutions also need an economic component. If unemployment wasn’t at its worst levels in more than a decade, if the economy was growing at a higher rate, the picture would be brighter.

There is hope. Treasury’s economic discussion paper released last week by Tito Mboweni would boost jobs and generate growth. It offers a way out of our troubles. But it is anathema to the ANC’s alliance partners Cosatu and the SACP, who are miffed they were not consulted.

Their quibbles could be equated to fiddling while Rome burns. So, too, could the reported comments of some MPs who, according to the Sunday Times, “warned that they will resist any attempts to trim their generous benefits”.

Another historical analogy also applies. Marie-Antoinette did not say, “Let them eat cake”, when advised in 1789 that her French subjects had no bread. Yet the callous remark reminds leaders about the dangers of losing touch with the people. Marie-Antoinette’s head was chopped off during the French Revolution.

Metaphorically, our leaders face the chop unless they connect better with the people. How can they sleep when SA is burning?