Rolling crisis is the new normal

Supposedly, cometh the hour, cometh the man. Ramaphosa, so far, has shown little sign of being that man. 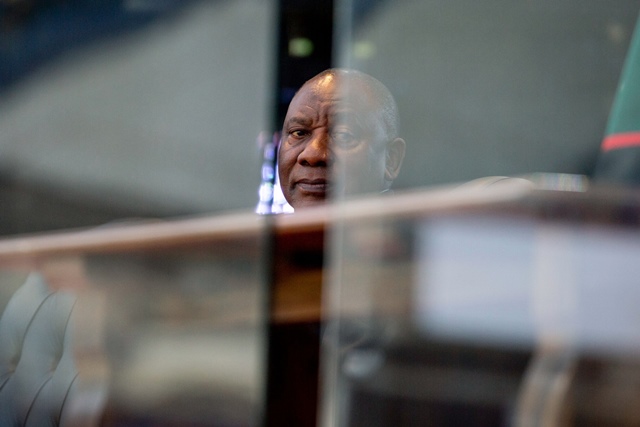 Cyril Ramaphosa looks on during his inauguration as South African President, at Loftus Versfeld stadium in Pretoria, on May 25, 2019. (Photo by Yeshiel PANCHIA / POOL / AFP)

The country was burning, again. People were being killed in mob violence, again. The police were blundering about, as ineffectual as ever.

On the eve of the World Economic Forum summit on Africa, attacks on foreign Africans suddenly dominated the headlines.

The violence had started at the weekend with attacks and arson on foreign-driven trucks, then spread. By Monday, foreigner-owned shops around Johannesburg and Pretoria were under attack by looters.

Police Minister Bheki Cele described it as “a national emergency”. Nigeria, Congo, Rwanda and Malawi withdrew from the summit. Zambia and Zimbabwe warned their truck drivers against entering SA.

In its timing for international relations, this was the biggest crisis yet faced by President Cyril Ramaphosa and his administration. But Ramaphosa was nowhere to be seen.

For days, not a word was heard from CR. On social media, spoof missing person posters circulated, asking “Have You Seen This Man?” At a moment that cried out for strong statesmanship, the president was initially invisible. When he eventually surfaced, his response was ham-fisted and unconvincing.

“As much as they have certain grievances, taking action against people from other nations is not justified…” Such attacks were “against the ethos” of SA and we “cannot tolerate attacks on people from other African countries and, indeed, from other countries”.

Does it mean Ramaphosa thinks that violence against foreigners, of any stripe, is unacceptable but the targeting of South Africans is less reprehensible? That’s certainly the view of Julius Malema, who bemoaned the fact that black anger against foreign Africans was misdirected and should be focused on the “whites [who] created this mess”.

The scapegoating of foreign Africans is a recurring occurrence, with about 60 foreigners killed in 2008. But the havoc has been far greater in the attacks aimed against foreign truck drivers. In the past year, more than 1,300 rigs were destroyed, with an estimated 213 deaths.

So, perhaps Ramaphosa’s apparent disengagement can be explained by none of the latest chaos being new, or even exceptional in its effect. Rolling crisis is the new normal.

That would be to misread the national mood. SA is crying out for a decisive leader. Ramaphosa has shown no sign of being one. In fact, based on his behaviour over the past 20 months, one must ask whether CR is psychologically robust enough to do what it takes to be the president.

His performance has been high on charm and beguiling promises, but low on delivery. Given how little he has achieved, aside from an admirable brace of judicial inquiries, Ramaphosa’s high levels of popularity are difficult to comprehend.

But popularity is not enough. No leader can thrive without a core that does not shrink from the head banging necessary to get things done.

Ramaphosa has not been one to bang heads. He is by instinct an appeaser, who puts the illusory unity of the ANC above the national interest.

He has avoided confrontation with the communists and the trade unionists in his alliance.

When Finance Minister Tito Mboweni released his economic rescue plan, the president uttered not a word in support of his minister.

These are testing times. Supposedly, cometh the hour, cometh the man. Ramaphosa, so far, has shown little sign of being that man.