Vuwani leaders vow shutdown will continue ‘until demands are met’

Protesters are also set to join the national day of action, saying they wanted Zuma 'out of office'. 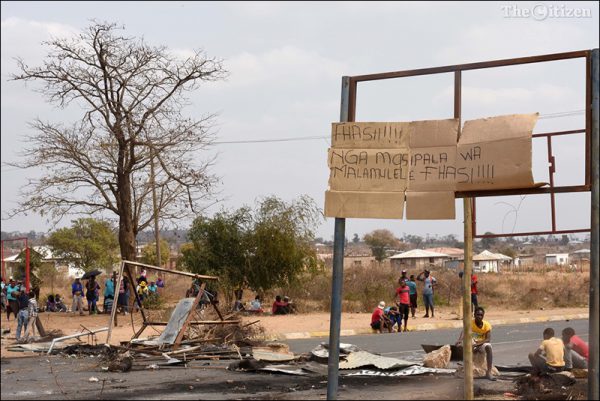 A cardboard sign opposing the Malamulele municipality, hangs on a vandalised street sign at a blocked intersection in Vuwani. Picture: Refilwe Modise

The total shutdown of services in Vuwani, Limpopo, will continue until residents’ demands are met.

The shutdown, a form of protest action, has seen children barred from going to school, while businesses have also not been allowed to operate.

On Monday, several social grant beneficiaries were forced to walk for more than 20km just so they could get their money, as taxis were not allowed to operate.

Protesting residents have been demanding that the Municipal Demarcation Board (MDB) reverse its decision to merge Vuwani with Malamulele and other surrounding villages to form a new municipality.

Despite the matter having even been to court, residents say they want to remain under the Makhado local municipality.

Speaking to The Citizen on Tuesday, one of the community leaders, Nsovo Sambo, said residents have made it clear that the shutdown of services will only be lifted once their demands are met.

“We had also applied for permission to gather, but the local municipality refused to grant us permission and that has further angered protesting residents.

“The refusal to grant residents to gather, is just another way of trying to intimidate us and that is not going to work,” Sambo said.

In the past, similar protests in the area were marred by violence, which had left more than 20 schools damaged.

Meanwhile, it is also believed that some of the protesting residents will be joining the national day of action, calling for President Jacob Zuma to step down.

“Most of the people here are fed up with the president and  just want him out of office,” a community source said.