The party's NWC accepted Zuma’s reasons that there was an 'irretrievable breakdown of relationship' between him and Gordhan. 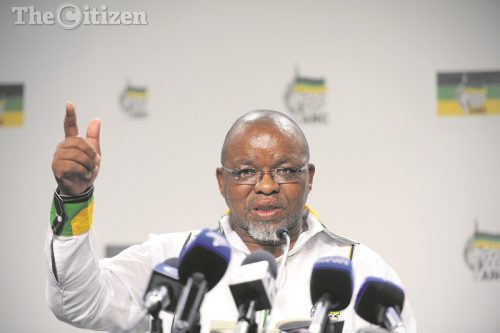 Despite mounting calls from civil society groups and the African National Congress’ (ANC) own tripartite alliance partners for President Jacob Zuma to step down, the ruling party has shrugged off the groundswell against its leader and supported his controversial Cabinet reshuffle.

Addressing the media on Wednesday in Johannesburg following a special meeting of the ANC’s national working committee (NWC), party secretary-general Gwede Mantashe – who has previously expressed unhappiness with the changes to Cabinet, along with Deputy President Cyril Ramaphosa, ANC treasurer-general Zweli Mkhize – appeared to apologise for his remarks, saying the party’s officials acknowledged that their public dissonance on the matter was a mistake that should not be committed again.

The secretary-general said the NWC accepted Zuma’s reason that there was an “irretrievable breakdown of relationship” between him and Gordhan as a sufficient explanation for his axing from Cabinet.

On the intelligence report Zuma is reported to have relied on to remove Gordhan and Jonas from their posts, Mantashe said the report – known as ‘Operation Checkmate’ – created a lot of unhappiness, saying it was “consequently presented as the only reason for his [Gordhan] removal, which was unfortunate and incorrect”.

The document purports that the former finance ministers were planning to embark on foreign investor roadshows to the United Kingdom and United States with local business and labour leaders to discredit and plot against Zuma’s administration.

Mantashe said Zuma consulting with the ANC’s top six leaders before the removal of ministers was not “a favour” but the president is not obligated to make public his reasons.

He said the NWC also reaffirmed that consultation on matters of deployment of ministers by Zuma was a principle of the ANC in accordance with its resolutions at its 52nd national conference in 2007.

The NWC congratulated the newly appointed Cabinet ministers and wished them well in their roles.

“The unfortunate events that transpired following their appointment should not and do not detract from the fact that they are very capable cadres,” Mantashe said.