The Cope leader said South Africans did not want to be governed by a party protecting 'dictators'. 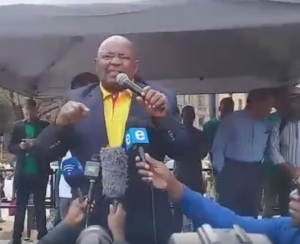 Congress of the People (Cope) leader Mosiuoa Lekota said on Friday at midday that they did not want anyone in government who would reduce the power of South Africa to attract foreign investment, help to create jobs and make lives better for the people.

They were standing against being governed by those who protect dictators who kill citizens in their country.

“We want to be part of the nations of the world that want equality for all. Therefore we subscribe to the universal declaration of human rights,” he said.

Lekota said Friday was the beginning of a campaign to take South Africa back to following a constitutional route.

“We want to take SA back and put it on the constitutional path that Nelson Mandela showed us.