Eskom board failed in its duties, says Manuel on Molefe’s reinstatement

‘Absolutely no way’ that contributions could have justified a R30m pension, says former finance minister. 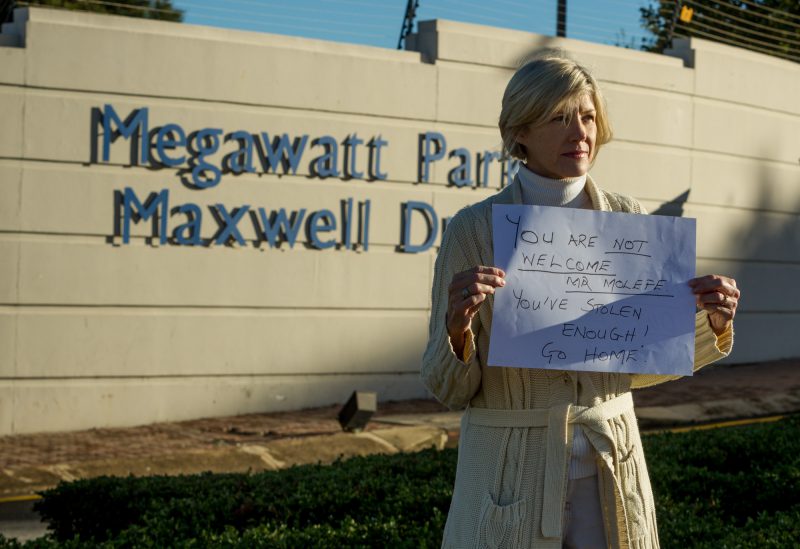 A protestor stands outside Megawatt Park in Sunninghill, Johannesburg. Members of the DA, COPE and some private citizens protested the reinstatement of Brian Molefe as CEO of Eskom, who resigned under a cloud of suspicion earlier this year. 15 May 2017. Picture: Yeshiel Panchia

The Eskom board failed patently in its duties by reinstating Brian Molefe as CEO, according to former finance minister Trevor Manuel.

Addressing delegates at the Ethics Institute’s seventh annual conference, Manuel pulled no punches in questioning the conduct of the Eskom board, the pension fund, Minister of Public Enterprises Lynne Brown and Molefe himself regarding the matter.

After he was implicated in the public protector’s State of Capture report, Molefe voluntarily stepped down as Eskom CEO in 2016, arguing it was in the interest of good governance.

Brown previously blocked a R30 million pension payout to Molefe and instructed the Eskom board to come up with an appropriate pension proposal, but in an about-turn on Friday, she announced that Molefe would return to head up the power utility as the pension payout would not be in the best interest of the fiscus.

Manuel said the Eskom Conversion Act, legislation passed in 2002, set a number of tasks in law.

Among those were that the board was “responsible for providing strategic direction and leadership, ensuring good corporate governance and ethics, determining policy [and] agreeing on performance criteria”.

Nowhere did any other piece of legislation governing corporations go into the same level of detail about leadership and ethics.

The board, headed by chairperson Baldwin Ngubane, was also the accounting officer in law, he said.

“When the board fails as patently as it does in this instance, who then takes responsibility?”

Manuel said the board almost certainly had a committee that dealt with social, environmental and ethical issues.

“Where is the committee?”

Referring to the proposed pension payout of R30 million, Manuel said all pension funds were governed by the rules of the fund and established in terms of legislation.

In each case, the value of a pension was determined by the rules and generally complied with either a defined benefit, or defined contribution, system.

“Depending on your contribution, which is matched by the employer’s contribution, you can then determine before you leave what your entitlement is.”

Manuel said even if Molefe’s term as Eskom CEO was generously stretched to 20 months, there was “absolutely no way” that the combination of his contribution, the employer contribution and the growth in the fund could have produced R30 million.

“Where is the pension fund in overseeing the way in which determinations are set?”

Manuel said Molefe took an oath when he was sworn in as a member of parliament to obey, respect and uphold the constitution.

“If he respects and upholds the constitution, why does he undermine the recommendations from its public protector?”

Manuel said the conduct of people appointed to lead institutions such as Eskom spoke to the nature of the ethical challenges facing SA.

Tariff increase: Eskom request to put SA electricity among the priciest in the world
5 hours ago
5 hours ago
PREMIUM!

Eskom sabotage an ominous sign
3 days ago
3 days ago

Tariff increase: Eskom request to put SA electricity among the priciest in the world
5 hours ago
5 hours ago
PREMIUM!

Eskom sabotage an ominous sign
3 days ago
3 days ago