Academics allege the ANC may owe Russia a lot of 'quid pro quo' for funding its expensive election campaigns. 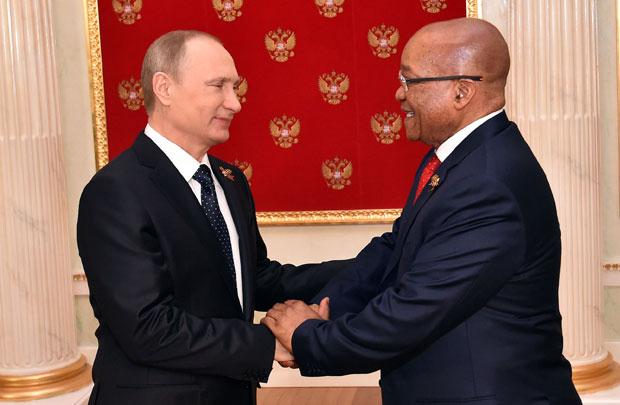 A damning academic report into state capture has said one of President Jacob Zuma’s top priorities was to ensure that the highly contested nuclear deal is finalised with the Russians – and this would signify “the final consolidation” of his “rent-seeking system”.

The consolidation of a rent-seeking system is seen as the glue that binds constitutional and shadow states.

“Ignoring for the moment the obviously important issues that this [nuclear power] is the most expensive form of power available, it is unaffordable now and will be more unaffordable when built due to inevitable budget overruns, as is normal in all Russian nuclear projects,” the report states.

“[A]nd the procurement process has been illegal … what matters is that the nuclear deal has emerged from the depths of the shadow state system.”

The report, released this week by academics at some of South Africa’s top universities – entitled “Betrayal of the Promise: How South Africa is Being Stolen” – exposes the country as a shadow state that has experienced a “silent coup” by an “underestimated” Zuma.

“The Guptas bought their uranium mine because they assumed the nuclear deal would be done, and there is evidence that Russian intelligence has a presence in the presidency to guide the process.

According to it, there are further allegations that “one set of transactions involved Russian funding for the local government elections, which may explain where the ANC managed to find R1 billion for this campaign”.

“It is reasonable to assume that the Russians have linked the approval of the nuclear deal to major investment initiatives in the future that could be useful for shoring up support of black business,” the group of academics have said.

“It is arguable, therefore, that alternative energy futures are at the heart of the South African political crisis,” the report states.