Sandile Mantsoe to appear in court for bail application

The media will finally be able to publish and broadcast details of the state and defence's affidavits during the hearing. 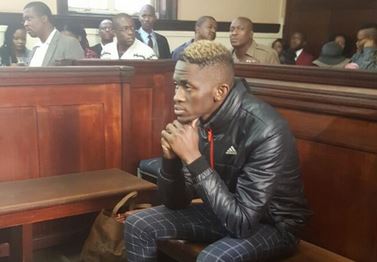 During Mantsoe’s previous court appearance, the media was barred from releasing details of his affidavit, which gave an explanation of what happened the day his ex-girlfriend Karabo Mokoena died in April.

However, the media will be allowed to publish information pertaining to Mantsoe and the state’s argument of why Mantsoe should not be granted bail. Details of the state’s affidavit will also be be heard in court today.

Mantsoe was arrested at the beginning of May for Mokoena’s murder. He is the main suspect after he apparently confessed to dumping Mokoena’s body and showed police where her burnt body was buried. The former couple had been dating for seven months and lived together in a Sandton apartment.

A forex trader, Mantsoe allegedly physically abused Mokoena throughout their relationship. During an interview with eNCA’s CheckPoint, Lolo Mokoena said she had advised her daughter to leave the relationship several times.

After Karabo had been admitted to Morningside hospital, Lolo said she told her that Mantsoe would one day kill her.

“I told her and said: ‘Karabo, Sandile is going to kill you, you can’t go on like this. This is not a toxic relationship; I don’t know what to call this.’”

In the same episode, an audio clip of Karabo telling how she had been ‘framed’ for physical assault was heard.

“I think two days after he hit me, he was robbed in Braam, fell and was grazed, and went to the police station, and told me that it was me that assaulted him. So I didn’t have strength for him, I was like, wow. You know, if someone can go to that extent …

“While he was hitting me, I think I fell on top of his car, and it got dented, and he told the police that I damaged his car,” said Karabo.

Mantsoe is married with three kids, a fact that shocked many last month.

Devil took charge of Sandile for doing work of the Lord, says congregant