Give us a coloured principal ‘or SA will burn’

A group of protesters has given Gauteng premier 48 hours to address them or streets will be barricaded. 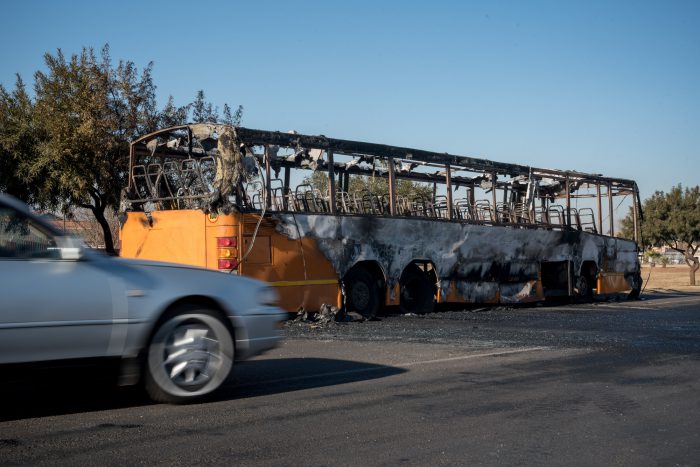 A car drives past the remains of a burnt out bus in Klipspruit, Johannesburg on 3 August 2017. Residents protested against the appointment of a school principal which they say was done without due process. The protests spilled into the streets today with a bus and tires being burnt. Picture: Yeshiel Panchia

A group known as the Patriots for Equality has threatened to “burn down the entire country” if government does not stop alleged discrimination against coloureds in top job positions.

The group led a protest against the deployment of a black female principal at Klipspruit West Secondary School.

Yesterday, angry members of the community allegedly set alight a Putco bus and barricaded the streets with rocks.

Rowdy pupils from different schools pelted police vehicles with stones, accusing them of shooting and injuring a 14-year-old pupil.

Patriots for Equality leader Anthony Williams said they were giving Gauteng Premier David Makhura 48 hours to address them, or major protests would ensue and streets leading to Klipsruit would be barricaded.

Speaking on behalf of the community and the dissolved school governing body (SGB), Williams alleged proper procedures were not followed when the new principal was appointed.

Williams said a coloured person had acted in that position for three months.

He added: “There is institutionalised racism across the country targeted at the coloured community. [The SA Democratic Teachers’ Union] has a project called “vat alles” which states that African blacks should occupy principal and deputy principal positions in schools, meaning coloureds are never going to assume leadership positions.”

Williams added that government tenders in the community and the school were awarded to “black Africans not from this area. Therefore, it is hogwash that we are racist.”

Pupils from the school told The Citizen that the two-week protest disrupted their studies, adding “we want to go back to school”.

Williams said the disbandment of the SGB by Gauteng education MEC Panyaza Lesufi was unjustified. Lesufi’s office said they were concerned and disappointed at the violent protest.

The department said this was despite Lesufi’s plea to the community to afford him an opportunity to finalise the appointment of the principal and report on the way forward.

He said coloured teachers were fairly represented at the school.– news@citizen.co.za