The president is said to be 'at ease' about his fate tomorrow, but it could be a close-run thing, secret or not.

ANC leaders have been hard at work in an attempt to ensure that all the party’s MPs toe the party line tomorrow when the motion of no confidence will be debated and voted on in parliament.

The state of play if the SACP decides to vote against Zuma.

It is understood that some individual MPs have been in contact with opposition parties on possible discussions regarding voting for the motion to have President Jacob Zuma removed from office.

Both the DA and EFF said they had the assurance of a large number of ANC MPs who would vote with the opposition should National Assembly Speaker Baleka Mbete call for a secret ballot.

Mbete has kept everyone in suspense as she is yet to announce her decision on whether the vote against her party boss would be cast in secret or not.

The ANC has never had to worry about its MPs voting against the party line during past motions, as dissenting MPs would be hauled over the coals for ill-discipline. This time around, the ANC has been forced to read the riot act to its senior leaders and MPs who have been outspoken about their lack of confidence in Zuma because they believe he has sold his government to the Gupta family. 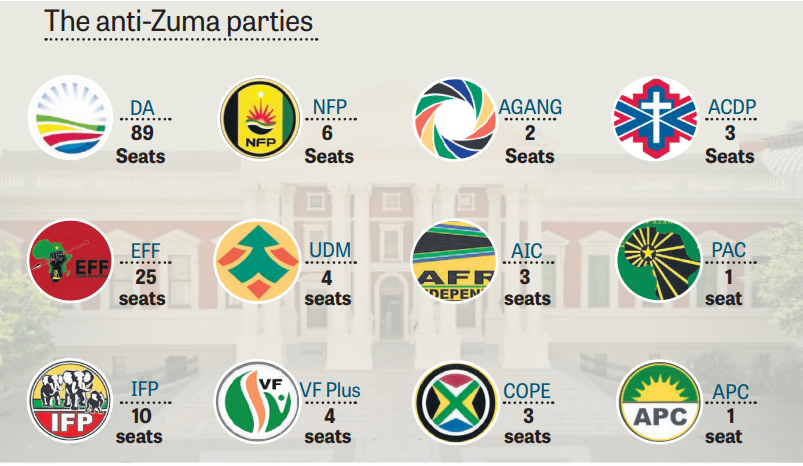 All of the opposition parties are likely to vote against Jacob Zuma. They have a total of 151
votes, 50 less than needed to oust the president.

Two senior ANC politicians told The Citizen on Friday that a picture had been painted for them about the unintended consequences of voting with the opposition.

“Some of us are angry with the direction that the ANC has taken,” said the one ANC leader.

“We know that we will have to fight harder than we ever have to win back the confidence of our people. But we cannot let the opposition take power in the manner in which they are trying to.”

Another leader said “any vote against the president” by ANC MPs “is an emotional vote”.

“What MPs don’t understand is that it is ANC voters that put them in parliament. We will be heavily punished by our voters because we would have betrayed their mandate. Sure, there is a way of dealing with the president and his flops and that should effectively be dealt with inside the structures of the party,” the leader said.

These sentiments seem to have struck a cord with MPs as well as ANC alliance partners.

This could be seen with the SACP statement that suggested the 17 communists deployed to parliament on an ANC ticket would not vote with the opposition. This was later amended to stress the SACP still wants Zuma to go.

“The SACP reiterates its consistent call for president Zuma to resign,” said party spokesperson Alex Mashilo in a statement.

“If the president does not resign, the ANC should recall him. Despite this, there still remains a lot of uncertainty on how senior MPs – some of whom are ministers – would vote should Mbete decide that there is reasonable justification to allow a secret ballot.”

MP Makhosi Khosa has openly spoken against Zuma and indicated she would vote for his removal during the sitting tomorrow.

Former finance minister Pravin Gordhan also called for MPs to vote with their conscience, which has been interpreted to mean that Zuma should be removed from office.

Human Settlements Minister Lindiwe Sisulu has thrown her hat in the leadership ring ahead of the ANC’s national elective conference in December, where she will be challenging for the presidency of the governing party with current deputy president Cyril Ramaphosa and Zuma-backed former African Union chairperson Nkosazana Dlamini-Zuma.

Minister in the Presidency Jeff Radebe also currently holds no brief for Zuma, given his recent declaration that he will also be challenging for the presidency of the ANC.

Zuma is said to be at ease and “not worried” that he may be voted out.

“He knows what’s at stake and believes that our MPs also know this,” said an ANC leader sympathetic to Zuma.

“There definitely are lessons to be learnt from this.”