Dudumashe denied ever saying those confused about their gender must check between their legs. 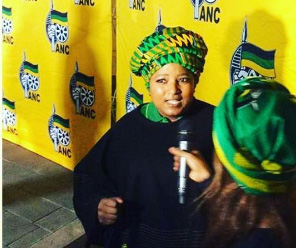 Radio personality and HIV/Aids activist Criselda Dudumashe has strongly denied allegations that she insulted transgender people during a symposium held on Friday at the University of Venda (Univen).

Raedani alleged that in both sessions, Dudumashe told men who did not stand up when requested to “look between their legs”. He, however, said contrary to the social media storm that raged over the weekend, he did not personally hear Dudumashe say: “Do what you will, I am going to lunch,” when some students protested the remark.

“It was a day’s event, and Criselda Dudumashe was the programme director. When she said those confused should look between their legs, some people were shocked, and others thought it was a joke, they laughed.

“Our [TVEP] work ensures upholding of human rights. We will help with lodging complaints to authorities such as Chapter 9 institutions and human rights,” Raedani said.

READ MORE: Stand up even if you’re a ‘she man’, Criselda allegedly tells Univen students

“What we would want from her is to unreservedly apologise. She needs to understand that there are other people who do not necessarily identify with their biological [sex],” he said.

When contacted, Dudumashe was taken aback by the allegations, saying during the event she underscored that the fight to eradicate violence against women could not be fought by women alone. She said men must get involved too.

“What I said is that men who feel strongly that they want to protect women they must stand up. If you did not feel like a man, it is not my problem. I was asking for men to stand up to be counted in the campaign,” she told The Citizen.

Dudumashe said the allegations were “linked to my appointment to South African National Aids Council [Sanac]. You can even see they were it was introduced. The complainants never came directly to me, they contacted the media”.

“The whole thing had nothing to do with HIV/Aids. If anyone is offended by the statement I made asking men to stand up I will apologise. I was appointed by the deputy president [Cyril Ramaphosa] to the board, and I will continue to serve,” she said.

The allegations against Dudumashe surfaced over the weekend when in a long social media post she said Mduduzi Manana, former deputy minister of education and training, had made an error of judgment.

A few moments later it emerged that Manana had resigned, and Dudumashe took down her post.