Prosecutor says if the accused are given bail, that could have damaging effects on the public. 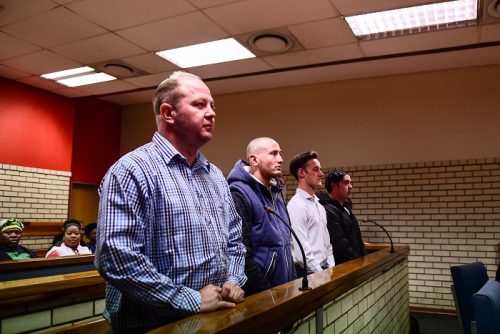 From left to right, Stefan Nel, DJ Van Rooyen, Ockert Muller and Joshua Liam Scholtz are seen appearing in the Pretoria North Magistrates Court during the bail application hearing of the five accused of assaulting a couple at a KFC drive through in Montana earlier this month, 25 August 2017, Pretoria. Picture: Jacques Nelles

The words “skiet hom, skiet hom” (shoot him) should be considered by the court in its final decision whether to grant bail to three of the five men who assaulted a black couple at a Pretoria KFC outlet earlier this month.

According to state prosecutor Ronny Sibanda, the men should remain in custody. The state has opposed bail, saying the nature of the offence is “serious, a hate crime and racially motivated”. Sibanda said the first group was attacking Jacob and Dudu Sono when the second group joined in, instead of stopping the fight or calling the police.

“Both of the groups are of the same race and claim not to know each other. So what can make people of the same race attack someone of another race if it is not a hate crime or race-related?” Sibanda asked the Pretoria North Magistrate’s Court.

Muller is out on bail and Van Rooyen – who was transported under guard to KwaZulu-Natal this week to appear in court for a case opened in Port Shepstone – abandoned his bail application.

Sibanda said if the accused were given bail, it could have damaging effects on the public. He added that the ANC Women’s League and Black First Land First were picketing against bail being granted, while civil rights group AfriForum protested against “double standards” regarding racial matters.

“It might outrage the public and disturb public order if the accused are granted bail,” Sibanda said. He said the accused might flee “due to the pressure” before the case could proceed.

Sibanda said the Sonos feared for their lives as the accused were familiar with them and also knew their vehicle registration number.

He dismissed Nel’s claim that he did not receive proper medication and should, therefore, be granted bail, adding that Nel could rely on his rights and on the constitution.

The matter was postponed to August 30. – news@citizen.co.za