The red berets are demanding that the school drops the charges against the two learners with immediate effect. 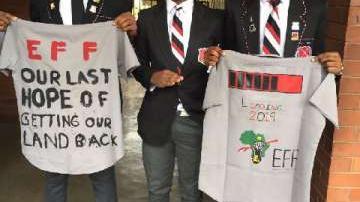 The EFF has declared its “unconditional support” to three pupils at Maritzburg College who have been charged by their school for brandishing political slogans at school.

The pupils sparked controversy recently after they posted a picture of themselves with the slogans “EFF our last hopes of getting the land back” and “loading 2019”. The furor has even prompted the Department of Education in KwaZulu-Natal to launch a full-scale probe into allegations of racism at the school.

On Saturday, the EFF threatened mass action at Maritzburg College should the school refuse to drop the disciplinary action against two pupils who were charged with contravening the Schools Act of 1996.

“We reject this as pure apartheid, Nazi and colonial thinking on the part of the school. In our democracy, there is no bylaw, rule or school code of conduct that must be inconsistent with our supreme law of the land; the constitution. Maritzburg High, by charging our young fighters, is in direct violation of the constitution. It is offending their rights to freedom of expression,” EFF national spokesperson Mbuyiseni Ndlozi said in a statement.

Ndlozi said the pupils did not “killed anyone, stolen anything or caused any physical harm”, but simply expressed an idea. He said the school should drop the charges and allow the teens to focus on their exams without any disciplinary hearing hanging over their heads.

“[…] by suppressing them, the school is not only anti-intellectual but also scared of the truth. By charging them, the school is seeking to guarantee protection to the reactionary and anti-black racists who refuse to see blacks as equals and as rightful owners of the land. The school is dancing to white supremacist tunes, thus reproducing itself as hostile to our democratic order,” he said.

“The EFF wants to send a strong warning to Maritzburg High that we are ready to defend the democratic rights of our supporters with any revolutionary means possible. We demand that they drop their reactionary and unconstitutional charges with immediate effect or face the full might of our mass power.”