Will Zuma’s allies get their way on nuclear?

It’s been reported that Mahlobo wants to rush through the new process of guiding the nuclear energy plan into fruition. 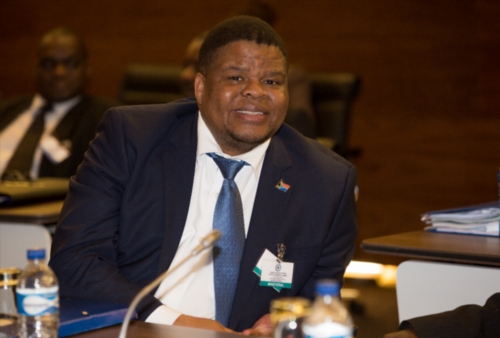 South Africa’s nuclear build programme seems to be back on the agenda after earlier indications that it was dead. Recent comments by President Jacob Zuma and his new minister of energy David Mahlobo, signal a final push to bag the nuclear deal while Zuma is still in power. In December Zuma’s term as president of the African National Congress will come to an end when the ruling party elects a new leadership. His term as president of the country ends in 2019. The Conversation Africa’s Business and Economy Editor, Sibonelo Radebe, asked Keith Gottschalk to assess the situation.

Is it still possible for the Zuma administration to bag the nuclear energy programme?

The worsening financial plight of the state and its parastatals makes the estimated R1 trillion rand cost of the proposed nuclear build programme increasingly unaffordable. The new Finance Minister Malusi Gigaba said as much. Slow economic activity is squeezing the tax revenue base while social expenditure demands keep rising. This has caused the deficit indicators to rise a cause for serious concern. Its ludicrous for government to insist on adding the humongous nuclear build programme into such dire state of public finances.

It’s also important to consider that government’s atomic ambitions go far beyond the 9 600 MW of extra nuclear power stations. It also wants to rebuild a uranium enrichment plant that dates back to former apartheid-era President PW Botha in the 1980’s. South Africa gave up its nuclear capability in 1989. It was the only country in Africa that had the ability to make a nuclear bomb.

Zuma’s administration wants to regain some of the lost nuclear capacity. It wants to construct a fuel element fabrication factory. It has talked of a nuclear fuel reprocessing plant. All these also bear steep price tags.

What can stop it?

It’s been reported that Mahlobo, the former state security minister turned energy minister, wants to rush through the new process of guiding the nuclear energy plan into fruition. So it’s not going to be easy to stop it.

But South Africa’s nuclear ambitions face stiff opposition from different directions. These include environmentalist critics of nuclear power generation who use a blend of media, street theatre, objections at public consultation processes, and lawfare to try and stop the government’s ambitions.

The SA Faith Community Environmental Initiative group won an important victory earlier this year when the Cape High Court ruled that the government had not followed due process in its nuclear energy plans, and that they had to be halted. This effectively sent government back to square one.

And there is palpable opposition within the ANC itself. A number of ANC branches sent motions critical of the costs of nuclear electricity to the ANC’s National Policy Conference. That conference’s report censored out all these motions.

The administration seems to be pulling out all the stops to bag this programme: What’s at stake?

By now, scandal-weary South Africans will react by saying: follow the money. In December 2016 the government dropped the bombshell that the procurement of its nuclear build programme would be taken away from the department of energy and done instead through Eskom.

The reason became clear when months of media headlines revealed that Eskom’s procurement mechanisms had been infiltrated and subverted by the Gupta family conglomerate to become a corporate feeding trough. With close ties to Zuma the Guptas stand accused of operating an elaborate mission to capture state business with a keen eye on the nuclear energy build programme

Every nuclear build contract, from “consulting” to turbines, would be inflated by one-fifth to build in the kickbacks to the corrupt middlemen tenderpreneurs.

Does South Africa need nuclear energy at this stage?

South Africa does not need nuclear energy at any stage.

About a decade ago, the government argued that South Africa’s economic growth was 5% per year every year, and that the resultant increase in electricity demand necessitated building 9 600 MW of new nuclear power stations. Critics pointed out that these figures were inaccurate.

Economic growth has shrunk significantly since then together with future projections of electricity demand. But the government still insist that the 9 600 MW of nuclear power proposition is backed by economic fundamentals. Clearly, this is a political decision uncoupled from economic realities.

On top of this, the most cost-effective generation of electricity would be a blend of imported hydro, imported gas, solar and wind. But these avenues seems to have been blocked by nefarious agendas.

In 2010, the department of energy proudly announced a 5 000 MW solar park to be built outside Upington. It hosted an international investors’ conference to kickstart progress. Since then, nothing has happened.

In 2014 the department proudly put up on the internet a slide show of how the Zuma and the DRC’s President Kabila had signed a treaty guaranteeing South Africa over 10 000 MW of imported hydropower once the Inga dams were constructed.

By December 2016 the department had effectively airbrushed these out of its presentations. Clearly, political power had been applied to compel the department to drop Eskom’s renewable division, and to suck up to its nuclear division. Which political power this was, became exposed this week when Zuma smeared opponents of his nuclear plans as western puppets.

What are global trends saying about nuclear energy?

The building of new nuclear power stations in developed countries is drastically declining. The UK is alone in signing a contract to build a new one. Nuclear vendors have stepped up their sales campaigns in developing countries to compensate.

Noodle deaths: No, foreign nationals aren't to blame – SAHRC
2 hours ago
2 hours ago

Noodle deaths: No, foreign nationals aren't to blame – SAHRC
2 hours ago
2 hours ago