Nealon Redhouse alleges the police officer threatened to cut off his 'totie (penis)' if he did not sign a warning statement. 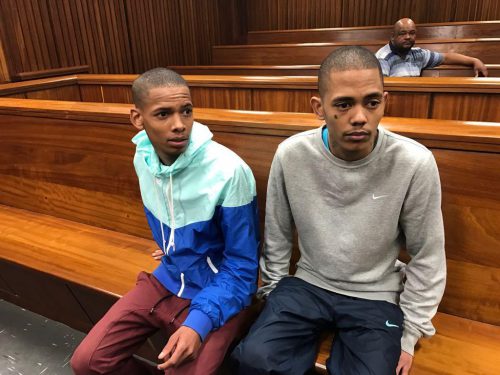 A senior police officer in the Eastern Cape Gang Investigation Unit was on Wednesday accused of attempting to castrate a suspected gang member charged with the murder of 12-year-old Aaliyah ” Angel” Tee.

At a trial-within-a-trial in the Port Elizabeth High Court, Nealon Redhouse, 18, took to the stand to claim that he was forced and threatened into signing the warning statement he made to the unit’s commander Lieutenant-Colonel Mike Grobler.

Redhouse and Deon Harmse, 24, are also charged with the attempted murder of Angel’s mother, Candice and father Edmund Tee, who was severely wounded in the attack at their Barberry Drive home in Bethelsdorp in June last year.

According to the State, Angel was murdered when gunmen, posing as cops, forced their way into the family home.

Redhouse claimed that Captain Rio Kriel threatened to cut off his “totie (penis)” and wanted to pull down his pants if he did not sign the document.

Kriel had earlier testified that he was asked to commission the statement after Grobler had conducted the interview with Redhouse.

Redhouse said that Grobler stood back and laughed while he was being threatened by Kriel into signing the statement.

The 18-year-old alleged gang member said the only reason he signed his warning statement was because he was threatened and felt scared.

Redhouse also claimed that Kriel had in his possession a sharp iron as a weapon.

Under cross examination, Redhouse told the court that he had only realised Kriel was the man who threatened him once the top cop had left the witness box.

State Advocate Mujaahid Sandan put it to Redhouse that his version of events were changing.

“So you telling me this court must believe the whole time he [Kriel] testified you didn’t look at him?”

Redhouse replied: “I was looking at him but I didn’t realise he was the one who wanted to cut off my penis.”

Sandan countered: “First your version was that you were forced to answer questions. Now you saying Grobler just wrote down on his own accord?

“It was never put to Kriel that he had a sharp object and it was not put to Grobler either,” Sandan added.

Redhouse also claimed that he was assaulted during the time of his arrest, saying he had sustained injuries to his lower lip, wrist and right eye.