Experts warn that Ramaphosa is into ‘risky’ business

New ANC leader has created high civil expectations but it is a dangerous moment. 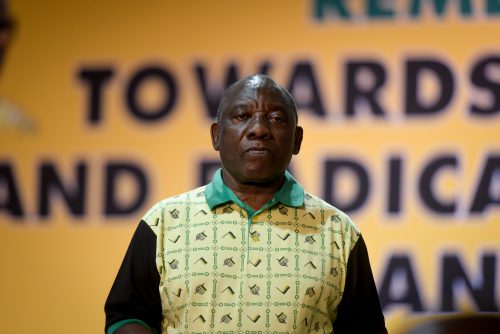 Newly elected President of the ANC Cyril Ramaphosa takes to the stage at the closing of the 54th National Elective Conference at Nasrec, Johannesburg, on 21 December 2017. The closing ceremony outlined broad policy approaches of the new leadership, which included expropriating land without compensation, free education and a crackdown on corruption. Picture: Yeshiel Panchia

The “house of cards” that President Jacob Zuma built around him is falling, and falling rapidly, in what is a pivotal moment for South Africa as corruption allegations are fast being dealt with.

It is also a very risky moment for newly elected ANC president Cyril Ramaphosa, who has spoken out against corruption, as more reports surface on the National Prosecuting Authority (NPA) and the Hawks swooping on dodgy individuals. Political commentators reacted to weekend reports that the NPA was closing in on the Gupta brothers and Mineral Resources Minister Mosebenzi Zwane, who according to their sources are expected to be charged soon.

However, the NPA has since vehemently denied this, calling the reports a “truck load of rubbish”. On Friday, the Hawks raided the offices of Free State Premier Ace Magashule and the provincial agriculture department in Bloemfontein, as part of an investigation relating to the Gupta-linked Vrede dairy project that allegedly had syphoned off millions of rands of taxpayers’ money.

Despite the NPA’s denial, political analyst Daniel Silke said this was still a tense moment for Ramaphosa as he goes to the core of corruption. “You do run the danger of alienating perhaps some of those around you. “This is a very rapid blitzkrieg manoeuvre to try and pull the rug out from under those who are allegedly implicated,” he said.

“Perhaps the view is let’s get it done as quickly as possible rather than [prolong] it.” That would allow those implicated to either manoeuvre their way out of positions or for a regrouping of political forces, which could undermine Ramaphosa, he said. “The strategy is to try and cleanse the matter before anybody can regroup.”

It is a “risky business” – and Ramaphosa also didn’t win with a very large majority at the party’s December conference, Silke pointed out. “But there is a certain amount of bravery here by Ramaphosa and his faction to move with this issue, despite a fragile victory in December. “We have seen Ramaphosa’s performance on the international stage, which has been very positive and we have seen the rand appreciate by well over 20% in the last few weeks,” Silke said.

“I think all of these factors, with a better sentiment coming through from the business community, have no doubt emboldened him to act and act quickly.”

Ramaphosa has created expectations about substantial action and formal charges being laid against individuals, he said. “So anything short will disappoint many. He is under pressure to follow through. There is such an intricate web of alleged wrongdoing that even those with fairly tenuous connections with the Guptas may well be targeted.” It’s further important for the NPA to look beyond the Guptas, Silke said.

“While we will see action on one or other of the Guptas, across the state there is evidence of corruption that is widespread. A broader view is indeed going to be forthcoming here.” Political analyst Ralph Mathekga said the time has passed where institutions were used to block investigations.

A lot of those people who are being mentioned would have been protected in the past.

“There is another point,” he said. “We know there is a political grouping in the party that doesn’t like this cleanup and wants to support those embattled people,” he warned.