Pressure mounts on ANC to deal with Mahlangu and Hlongwa

The Treatment Action Campaign took to the streets to have the two kicked out and held accountable for the mess Gauteng health is in. 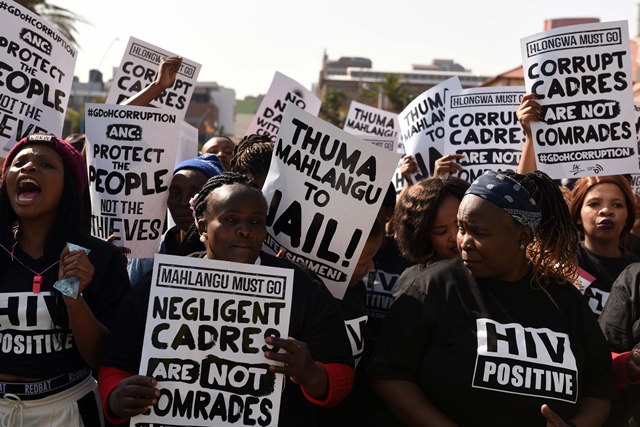 The Treatment Action Campaign (TAC) marched to the Gauteng Legislature to demand the removal of former Health MECs and current members of the Provincial Legislature, Qedani Mahlangu and Brian Hlongwa. Mahlangu is implicated in the Life Esidimeni tragedy and Hlongwa stands accused of facilitating corruption in the Health department during his tenure, 7 August 2018. Picture: Neil McCartney

Excuses are running out for the ruling ANC to keep former Gauteng health MEC Qedani Mahlangu and party provinical chief whip Brian Hlongwa within its ranks as pressure mounts for it to get rid of the controversial politicians.

Now, the ANC is facing a real threat of losing votes in 2019 as its former ally, the Treatment Action Campaign (TAC), took to the streets to have the two kicked out. The organisation demanded a debate in the provincial legislature on Hlongwa’s plight.

Both Mahlangu and Hlongwa were recently elected into the ANC provincial executive committee in Gauteng despite facing serious allegations, including murder and corruption.

Mahlangu, who resigned as an ANC MPL and MEC for health, is accused of failing to account for the deaths of 144 mental patients from Life Esidimeni facilities.

This after the patients died in the hands of unqualified and ill-equipped nongovernmental organisations to which they were transferred by the provincial health department. 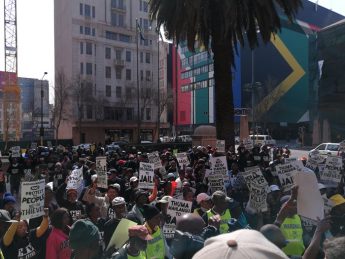 The TAC further demanded that Hlongwa must account for R1.2 billion allegedly fraudulently spent to build a mansion for him in Bryanston, north of Johannesburg.

The fraud was uncovered by the Special Investigation Unit which found that companies doing business with the health department allegedly paid kickbacks to Hlongwa and some department officials.

Hlongwa has repeatedly denied any wrongdoing, but that did not stop the opposition parties and civil society from pursuing the matter.

The TAC this week handed over a memorandum to Gauteng legislature speaker Ntombi Mekgwe demanding an urgent turnaround to the collapsed health system in Gauteng. It asked Mekgwe to schedule a debate on the Hlongwa issue in the provincial legislature. 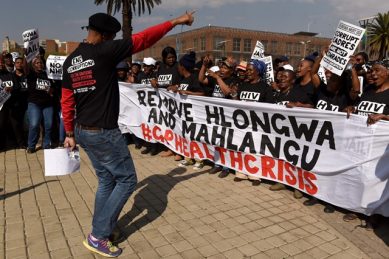 The Treatment Action Campaign (TAC) marched to the Gauteng Legislature to demand the removal of former Health MECs and current members of the Provincial Legislature, Qedani Mahlangu and Brian Hlongwa. Picture: Neil McCartney

“Hospitals are in a shambles. Patients are found sleeping on the corridor floors and ambulances are scarce and unreliable. The dysfunction in Gauteng is claiming lives and leading to widespread suffering. We have had enough of these daily indignities.

“Hlongwa and Mahlangu must be held accountable for their failings,” Mtsweni said.

The organisation said that Hlongwa and Mahlangu were elected into leadership positions in the Gauteng ANC was indicative that the ANC did not care about the plight of people who suffered under these politicians. It demanded an urgent turnaround of the collapsed health system in the province. 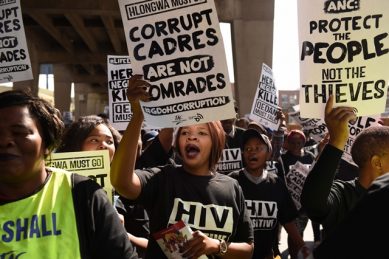 The Treatment Action Campaign (TAC) marched to the Gauteng Legislature to demand the removal of former Health MECs and current members of the Legislature, Qedani Mahlangu and Brian Hlongwa. Picture: Neil McCartney

The EFF, Democratic Alliance and Freedom Front Plus joined the marchers in front of the legislature. The parties, warmly welcomed by the marchers, explained how they had been fighting the ANC in the legislature to act against Mahlangu and Hlongwa, and to improve the Gauteng health system.

EFF’s provincial chairperson Mandisa Mashego told Saturday Citizen the party had asked the National Prosecuting Authority to speed up the prosecution of Mahlangu for the death of the 144 patients.

She said they would approach the Hawks in the province and nationally to investigate several incidents of corruption the party had found in Gauteng.

Freedom Front Plus MPL Philip van Staden said his party would not rest until Mahlangu and Hlongwa were put behind bars.

DA health spokesperson Jack Bloom said the fact that it took 18 months before the ANC referred the Mahlangu matter to the integrity committee was indicative of a lack of caring.

ANC and DA likely to shed some votes to Mashaba - analyst
4 days ago
4 days ago
PREMIUM!

ANC and DA likely to shed some votes to Mashaba - analyst
4 days ago
4 days ago
PREMIUM!