Fleeing hijacker ends up dead in front of funeral home

A chase that started in eMalahleni involved a sequence of increasingly bad luck for the criminals, all the way to Bronkhorstspruit. This suspect was felled after a desperate chase from eMalahleni to Bronkhorstspruit, which ended with him being killed in front of Avbob. Pictures: Witbank News

A Ford Laser was hijacked by two armed men in eMalahleni, Mpumalanga, setting off a series of events that ended with one of the perpetrators being shot dead on the doorstep of a funeral undertaker, reports the Witbank News.

The vehicle was hijacked on the morning of August 2.

The suspects quickly attempted to get of eMalahleni with the stolen car, but Cyber Security officers doggedly pursued them. They were unaware a tracker had been installed in the vehicle.

The criminals fired off a few rounds at their pursuers, who nevertheless stayed on their tail.

The hijackers then turned the stolen vehicle off the main road at the Bronkhorstspruit-Groblersdal exit and careened into Rooth Street before attempting to escape into Kruger Street.

They directed the stolen vehicle into an open field and jumped out of the still-moving vehicle. 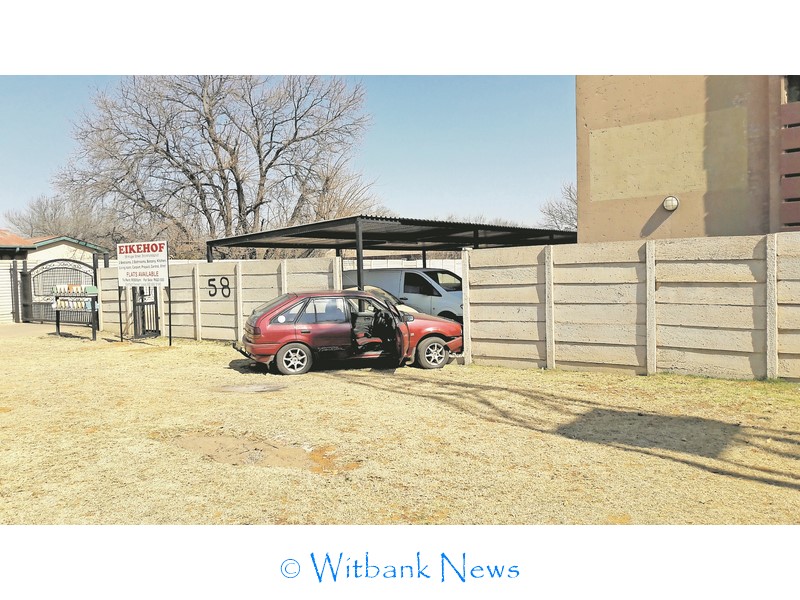 The Ford Laser’s dash was cut short by the cement wall of an apartment building.

The vehicle ploughed through the cement wall of an apartment building before coming to a stop.

They tried to disappear into the Bronkhorstspruit Forum office building complex, making the mistake of choosing an office block that houses both the Streeknuus and the detective offices of Bronkhorstspruit’s police force.

One of the suspects was fatally wounded in a subsequent shooting outside the local Avbob branch.

Lt Col Johan Swart was on the scene almost immediately and secured the bloody scene. One of the suspects breathed his last in front of Avbob’s front door.