The raid comes after Malema allegedly fired a rifle at the EFF's fifth birthday celebration in the Eastern Cape last month. 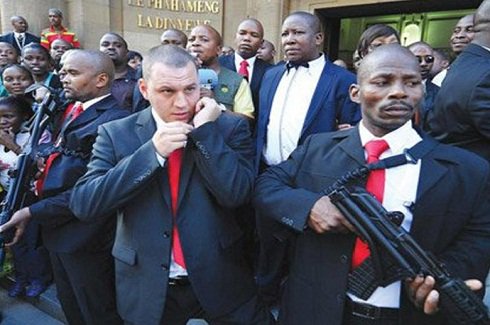 The property, situated on Lighthouse Road on the Bluff in Durban, reportedly belongs to Adriaan Snyman, who runs security company Tactical Security Services from the house.

Update: The Citizen was contacted by Snyman’s laywers, who said that no property belonging to Snyman was ‘raided’, as alleged, since Snyman is not the owner of our the business, nor a member of the entity concerned.

IOL reports that 12 rifles were confiscated, and have been sent to ballistics testing in Port Elizabeth.

The raid comes after a video emerged of Malema firing what appeared to be a high-powered automatic rifle into the air at his party’s fifth birthday celebration gathering in the Eastern Cape last month.

The party told News24 that their leader had been firing in “simulation” at the Sisa Dukashe Stadium in Mdantsane in the Eastern Cape that Saturday.

Snyman handed the alleged rifle to Malema before the shots were fired.

IOL further reports that after the alleged shots were fired, shells were gathered at the stadium. It is currently being investigated whether the shells match the guns that belong to Snyman. The raid took place in a bid to confirm this match.

If police can prove that Malema indeed fired real shots and that the incident was not a ‘simulation’, he could be arrested, a source told IOL.

After the incident, the African National Congress Youth League (ANCYL) eThekwini Region called for a police probe into Malema, calling for him to be charged under the Firearms Control Act.

Black First Land First (BLF) leader Andile Mngxitama said the blame should rather be placed at the feet of the “white man who handed Malema the rifle”, and they laid charges against him at the Hillbrow Police Station.

“The irresponsible behaviour of the white gun man was calculated to cause harm to black people. The crowd which was potentially under threat was black. The intention of the white man was very clear – that harm should come to black people,” the BLF’s statement read.

AfriForum also requested an investigation into Snyman, as well as the fact that this firearm was given to Malema at the EFF’s fifth birthday celebrations.

“Snyman is a controversial person who allegedly had many run-ins with the law on numerous occasions in the past,” alleged Ian Cameron, AfriForum’s head of community safety.