The pupil attempted to run away and the attackers gave chase. 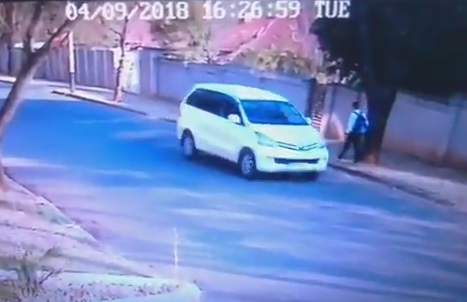 A shocking video of a what appears to be an attack on a school pupil walking home has surfaced.

The footage recorded from a resident’s security camera close to the attack shows a white Toyota Avanza driving close to a school pupil on Tuesday afternoon around 4pm.

It is still unclear where the attack took place.

The footage shows a man coming from the white vehicle to attack the pupil. The pupil sees his attacker and makes a run for it.  The attacker gives chase and grabs the pupil who loses his step and falls to the ground.

The Avanza reverses towards the student which may imply the attackers may have wanted to kidnap him.

Fortunately, the would-be victim escapes into a residence and the attackers speed off thereafter.

It is unknown if the men took anything from the pupil.