Malema tells Gqubule to take up Stratcom allegations with Madikizela-Mandela

The EFF leader says his party never said the two journalists were working Stratcom, but only repeated what 'Mama' said in a video. 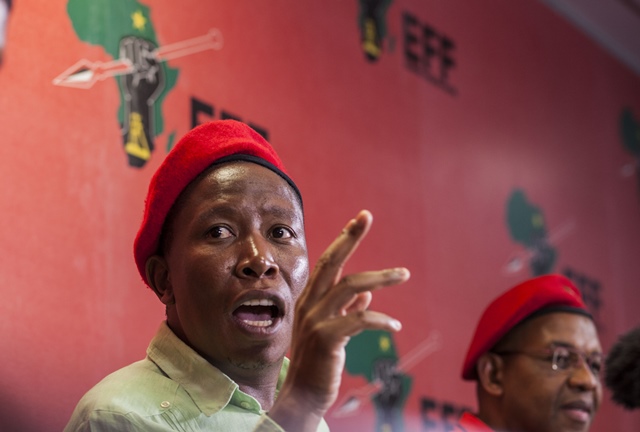 EFF leader Julius Malema has defended his party against allegations that they ever in fact said journalists Thandeka Gqubule and Anton Harber were apartheid-era Stratcom spies.

In an interview with Vuyo Mvoko on eNCA on Thursday, Malema said his party did not make any such allegation against the two journalists, but only called on them to “confess” and apologise if they had indeed worked for Stratcom.

He said: “We never said she’s Stratcom. Winnie [Madikizela-Mandela] mentions her and we’re not saying that and she has done exactly what we have asked her to do. We said ‘Mama mentions the two and Mama says there were many others and we’re calling upon the two and the rest of the unnamed to confess if indeed they’ve worked for Stratcom’.

“She will have to prove to the court where the EFF says she is Stratcom. The names released were a repetition of what Mama says in the video,” he explained.

“Where do we get in? Singena phi thina?” he asked.

Malema said he did not understand why Gqubule had gone to court when she had already done everything the party had asked her to do.

“She has gone to different houses to shop for information that clears her name. I think that closes the matter. We never took any platform and said she was Stratcom,” he said.

He said his party wrote Gqubule a letter and explained the “context” of their tweet, explaining that they never said anything to suggest she worked for Stratcom.

If Gqubule has an issue, she must take it up with Madikizela-Mandela, added the EFF leader.

He said his party was unshaken about the court case and would defend itself in court.

Gqubule on Thursday gave the red berets seven days to prove an apparent allegation that she and Harber were apartheid-era Stratcom spies.

This came after a video was posted (and then removed) by the now defunct Huffington Post SA shortly after Winnie Madikizela-Mandela’s death. It showed a clip from her 2017 interview in which she addressed how there were journalists hellbent on writing negative stories about her.

Madikizela-Mandela alleged: “There were reporters who specialised in writing very negative stories about me like Thandi [Thandeka] Gqubule. They were working for what was then called the Weekly Mail. I was pleasantly surprised to see Anton Harber talking like that [in the Winnie documentary] because he was the editor … and the Weekly Mail was so anti-ANC, anti-me. They actually did the job for Stratcom.”