Ramaphosa reassured the residents plans were being looked at that would alleviate the issues of gender-based violence and xenophobia. 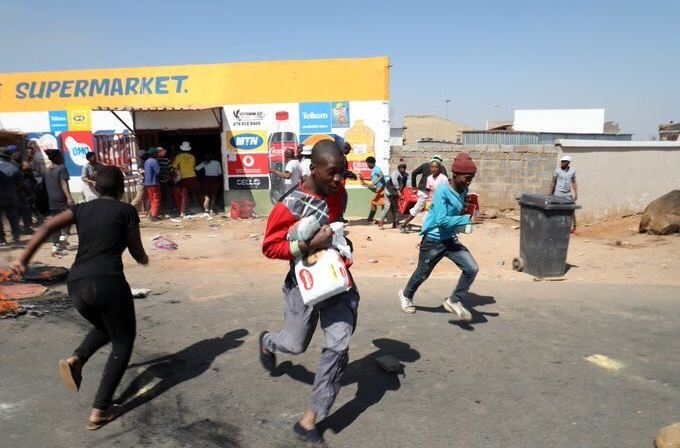 Ramaphosa said residents should not use violence to resolve problems but to "sit down and talk", saying men should respect the women and children of South Africa. Picture: Twitter.

President Cyril Ramaphosa has called on all South Africans, especially men, to stand up against gender-based violence and xenophobia.

Ramaphosa reassured the residents plans were being looked at that would alleviate the issues.

Among the plans included were: harsher minimum sentences for sexual offenders as well as increased investment and job creation.

He called on the Katlehong community to obey the law or else “you only have one place to go and that is to jail”.

Ramaphosa said residents should not use violence to resolve problems but to “sit down and talk”, saying men should respect the women and children of South Africa.

Attendees, however, were left uninspired after his address.

Victoria Qhobela, a Katlehong resident, told News24 that while she believed Ramaphosa could create jobs for South Africa, he was not doing enough to end gender-based violence.

“What I like about Ramaphosa, I like it when he says we are all South Africans, no one must go. We all belong here in South Africa so we must stop xenophobia.

“But when he [talks about gender-based violence] – these things happen while the police are here watching. So I don’t know. He said he would come back but we will wait 10 years until he comes back,” Qhobela said.

“He didn’t show us enough. We want more,” she added.

She said the community had no problem with legal immigrants coming to South Africa, but could not compete for jobs with illegal ones.

“South Africans are angry about people doing crime in their country… When we as the government do not attend to them the way we should – arresting them and so on – people end up taking the law into their own hands.

“All of us as citizens must make sure that things are done and done right here. People are hungry, people need jobs,” Buthelezi said.

“Joblessness is a ticking time bomb. A hungry person will burst one day and things will be like this.”

On gender-based violence, Buthelezi said it does not start with Ramaphosa but society as a whole.

“Women need to get educated so that they have a better chance [to] … make their own money and be independent,” she explained.

She said South Africa was an extremely violent country.

“Societal problems can’t be categorised and put into boxes. Now, we have a fragmented society, into races, into the haves and have nots and so on, but rich or not, this thing is a cancer that cuts across all lines.

“We need to go back to basics … all societies need to address the question of violence. Violence begets violence,” Buthelezi said.

Katlehong has been at the centre of xenophobic protests as foreigners were attacked by local protesters.