Eleven-year-old Kiara Manuel had been dropped off by her father, Byron Wilson, at her grandmother’s flat on the morning of the fateful event. 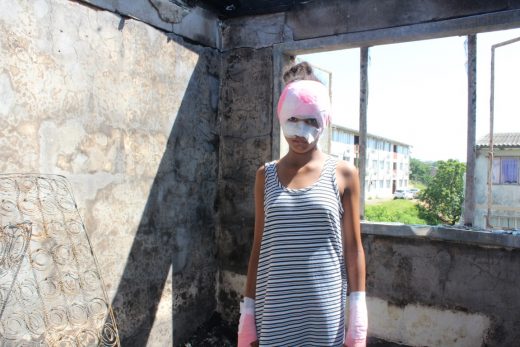 Fire survivor, Kiara Manuel, 11, stands in the room where the fire happened in her grandmother’s flat.

While calm at Engen Refinery has been restored, the family whose flat caught alight is left to pick up the pieces.

Although investigations still continue, speculation of the cause of the flat burning point to debris possibly flying some 900m out and landed on the roof of the home.

Eleven-year-old Kiara Manuel had been dropped off by her father, Byron Wilson, at her grandmother’s flat on the morning of the fateful event.

“I dropped her off with my mom at about 5am on that day. The same morning at about 7am I got a call saying there was a fire in the flat. She was lying on her bed and something came through the roof and landed on her bed.”

“She just said daddy, the roof caved in and it was really hot. Her grandmother at that time was outside hanging the washing. She ran back to get both the children outside but then came back concerned about her paperwork (identity documents and bank cards). A man came in and pulled her out of the house,” he said.

Kiara sustained burn wounds to her hands, face, and head while her grandmother, who has also been discharged from the hospital constantly complains about pain from her ribs. The grandson is said to be in a much better position.

Wilson said his daughter stayed in hospital for two days and that no representative from Engen visited the family. The family is currently housed on the Bluff with accommodation paid for by the company.

A prayer meeting for the speedy recovery of all Engen staff affected in the blast was held at the refinery’s main gate on Tuesday, 8 December at 8.30am. 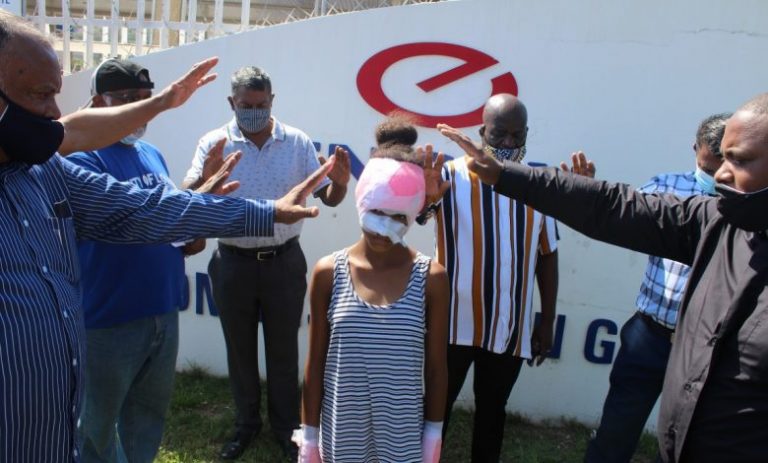 Speaking on behalf of the church ministers, Pastor Takalani Mufamadi of the Grace Tabernacle Church said a firmer stand should have been taken five years ago when a similar incident occurred.

“The first explosion left a suite that goes as far as the northern part of the Bluff and a lot of people were affected by that. Merebank which is on the southern side of the plant has a lot of people suffering from chest problems and some of them from cancer.”

“As much as Engen is, on one hand, doing something good job-wise, as people are able to put bread on the table and take care of their families, the safety issue is a greater measure to be looked into and we just hope that there will be a proper agreement. We also have to remember that the explosion also affected the people who work at the refinery. There must be an amicable reach with both the negotiators and Engen itself,” he said.

Pastor at the Christ Centre Ministries and chairman of the Fellowship of Christian Ministers in Merebank, Pastor Junior Naidoo said, “As pastors, we are here to say that we understand Engen is a necessary component in the country but at the same time, we want for it to not be a one-sided thing.”

“Based on what happened last Friday and seeing this young girl’s condition, we thank God that she did not lose her life that there were no fatalities. We believe there was a divine intervention from God and it was not luck. There is a starring up that is taking place in the community and there has been silence for far too long.”

In response to the explosion, the South Durban Community Environment Alliance urges community leaders to support a joint plan of action to hold Engen liable for the outcome.

Residents are invited to take a stand on Wednesday, 9 December at 8.30am, in a mass march to Engen on Tara Road. The gathering will be at the main gate.

A response from Engen was not available at the time of publication.

This article was republished from Southlands Sun with permission