How to identify looted bank notes

Over 1,400 ATMs were forced open and compromised during last week’s looting spree. 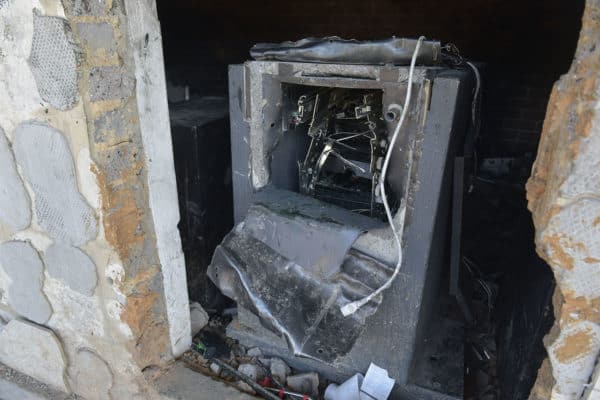 ATMS that were opened up at the Pan Africa Mall in Alexandra, 14 July 2021 after mass looting happened in the area. Picture: Neil McCartney

There has been an increased circulation of dye-stained bank notes following the destruction of ATMs amid violent protests in large parts of kwaZulu-Natal (KZN) and Gauteng (GP).

Specialist investigator into serious violent and serious economic crimes Mike Bolhuis says that those in possession of dye-stained bank notes make themselves suspects of a criminal investigation.

“Visuals of looters vandalising ATMs have been rife on social media and the national broadcasting networks,” said Bolhuis.

“The looting started with booze and then expanded. ATM machines were ripped out of their casings in shopping malls and the cash stolen.”

He said that during the looting of ATMs, bank notes get spoiled, which is a way of sending a “message to criminals that there is no point trying to steal the cash protected by dye-staining systems because they will be unable to use the cash after a theft or robbery.”

ALSO READ: ‘The looting started with booze and then expanded’

“The purpose of cash degradation systems is to protect cash from being stolen by ‘spoiling the reward’ namely rendering the cash unfit for use by criminals after it has been stained.”

The central bank has also urged South Africans who were given or unknowingly accepted such notes to take them to their nearest police station immediately. It said that affected banks were currently assessing the impact of the excessive destruction of ATMs.

A few things to know about looted bank notes

Acting Minister in the Presidency Khumbudzo Ntshavheni said that the items will be used as evidence when those found in possession are charged.

Once that process is over, owners of those items will have to produce their serial numbers to claim them back, if not, they will all be destroyed.

“The recovered goods will be destroyed, and why you destroy them is because those goods diminish the value of other goods if they circulate in the market,” said Ntshavheni.

“They diminish the value of other goods, so we cannot afford to collapse the economy by circulation stolen goods, allowing stolen goods to be circulated in the economy, so they have to be destroyed in line with the police. It’s part of managing the goods that are in the country, that’s why we manage what’s in the country and what goes out the country,” said Ntshavheni.