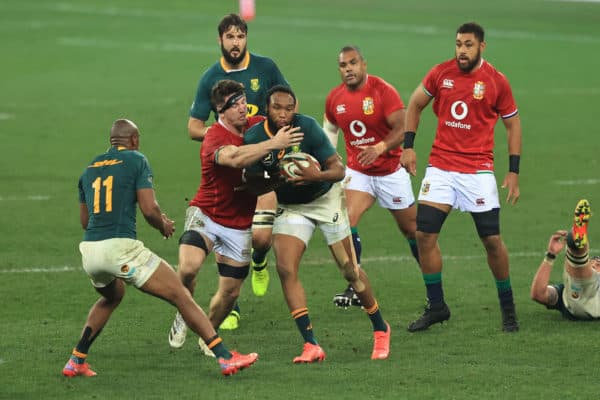 The Springboks have been accused of being boring, something assistant coach Deon Davids said wasn't true. Picture: David Rogers/Getty Images

News24 has reported that the Crime Intelligence division within Saps has sent out a number of “early warning” reports – between 9 and 12 July – regarding the possibility of violence.

The violence, which occurred in parts of KwaZulu-Natal and Gauteng, leaving more than 300 people dead to date, was ostensibly sparked by the imprisonment of former president Jacob Zuma.

According to the Foundation, the Concourt is calling on parties to submit a 20-page document on how Zuma’s detention possibly affects International Law, as well as “the constitutional implications of his ongoing detention”.

The parties are directed to file written submissions on the implications and to consider the United Nations’ International Covenant on Civil and Political Rights.

These findings should be submitted before 13 August 2021.

But some South Africans has since questioned the appointments of the deputy ministers.

It looks like former President Jacob Zuma’s son, Duduzane, is getting the ball rolling in his bid to be the president of African National Congress (ANC) next year.

In an interview with Newsbreak Lotus, Zuma revealed that he has begun processes to contest the ANC leadership at the ruling party’s 55th National Conference set to take place in December 2022.

As of Saturday, 7 August, the cumulative number of detected Covid-19 cases in South Africa is 2,523,488 with 12,371 new cases identified, the National Institute for Communicable Diseases (NICD) confirmed.

This represents a 21.6% positivity rate.

Minister of Sport, Arts and Culture, Nathi Mthethwa, on Friday gazetted the name change for Brandfort to Winnie Mandela. The town is situated in central Free State, approximately 60 km from Bloemfontein.

The town’s name was changed in terms of Section 10 (2) of the South African Geographical Names Council Act, 118 of 1998. Why the change from Brandfort to Winnie Mandela, you may ask?

Spokesperson Masechaba Khumalo explains Brandfort is where the late struggle icon Winnie Mandela “was banished by the then-Apartheid government in 1977”.

Mohale Motaung has revealed that he is in the process of divorcing entertainer and his estranged husband Somizi Mhlongo.

The pair have been in the headlines all week after a Sunday World report revealed that Motaung had accused Mhongo of being physically abusive.

Motaung detailed various instances in which Mhongo is said to have broken his ribs, loosened a tooth, run his car off the road, and threatened him with a knife.

Like he did in 2009, Morne Steyn stepped up and kicked the match-winning and series-clinching penalty for the Springboks against the British and Irish Lions in Cape Town on Saturday.

The replacement flyhalf, who broke Lions hearts in the series in 2009, repeated the feat from off the bench in the 79th minute on Saturday, slotting the three-pointer to ensure a 19-16 win for the Boks.

After losing the first Test 22-17, the Boks hit back to win 27-9 in the second Test and on Saturday it was as close as it could have ever been.

Siya Kolisi and several of his men are now not only World Cup winners but Lions series champions, too.