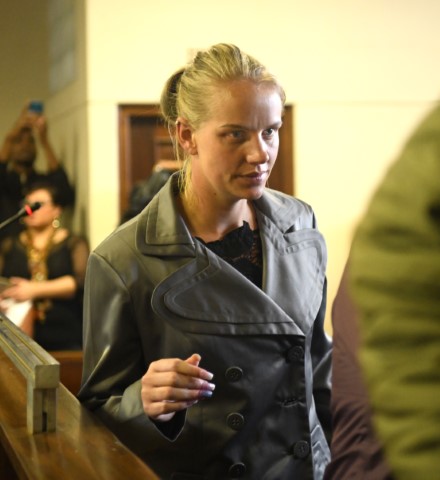 Tharina Human, 27, alongside 50-year-old Pieter van Zyl, has been denied bail. Letitia Nel has been granted R25,000 bail and is expected to report to the Vanderbijlpark police station every Wednesday. She is expected to submit her passport if she fails to declare that she has one to the police. She is also barred from having any contact with the De Jager family.

Human and Van Zyl have been remanded back in custody.

The trio was arrested for allegedly kidnapping Amy’Leigh and taking her to a smallholding in Rosashof near Vanderbijlpark. She was reportedly made to stay put in a cooling room under a water tank.

Human, who has since been fired from her teaching post at Laerskool Kollegapark, is alleged to be the mastermind behind the kidnapping. She was also a close friend of the De Jager family.

The six-year-old was snatched outside her school in Vanderbijlpark on September 2 and in reading his ruling, Judge Hussein Khota said the three violated Amy’Leigh’s constitutional right to freedom of movement.

The safety of the three in custody is also at risk, he added. The state has opposed bail, maintaining that the release of the accused would endanger Amy’Leigh, society, and themselves.

“What would the courts’ position be if they were granted bail?” Khota said.

Taking into account the threats made to the trio inside court, Khota said it influenced the court’s view, that pointed fingers highlighted some form of threat to the three and that it could prompt the suspects to flee.

He said the media had had no influence on the case and that in that regard, the six-year-old’s state should be considered.