Deokaran, a Gauteng health official, was gunned down outside her home in Mondeor, south of Johannesburg, last Monday. 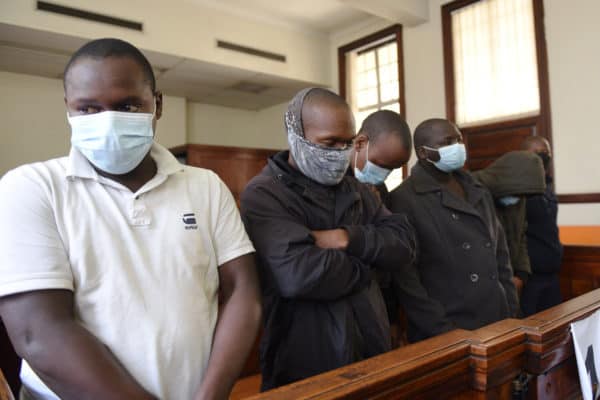 Six suspects appear in the Johannesburg Magistrate's Court, 30 August 2021, on charges related to the murder of Gauteng health department finance officer Babita Deokaran. Deokaran was gunned down outside her Winchester Hills home and she was a key witness in the investigation of protective equipment (PPE) contracts. Picture: Nigel Sibanda

Six men who were arrested last week in connection with whistleblower Babita Deokaran’s murder have made their first appearance in the Johannesburg Magistrate’s Court.

They made a brief appearance in the dock on Monday, when their case was adjourned to mid-September for a formal bail application.

Deokaran was gunned down outside her home in Mondeor, south of Johannesburg, last Monday.

The acting chief financial officer for the Gauteng department of health was one of the witnesses in the Special Investigating Unit’s (SIU’s) probe into allegations of corruption involving a R300 million personal protective equipment (PPE) tender.

Gauteng Premier David Makhura, at a vigil for Deokaran last week, said her murder was linked to the probe but the SIU has since said its could not confirm the connection at this stage.

Deokaran’s murder has brought to the fore concerns around the safety of whistleblowers and witnesses.

Seven men – all from KwaZulu-Natal – were initially arrested in connection with the crime on Friday but one wound up not being charged due to a lack of evidence against him.

READ NEXT: Ramaphosa: Babita Deokaran ‘was a hero and a patriot’

Babita Deokaran’s alleged killers' bail to be heard in camera?
3 weeks ago
3 weeks ago

Babita Deokaran’s alleged killers' bail to be heard in camera?
3 weeks ago
3 weeks ago