Former eThekwini mayor Zandile Gumede and 21 others are facing a string of charges relating to the scandal. 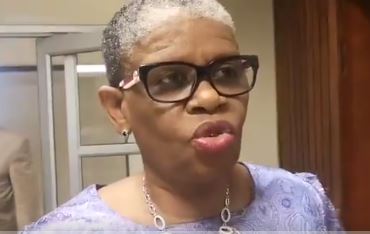 Screengrab of Twitter video of former eThekwini mayor Zandile Gumede after her fraud case was postponed in Durban, 15 January 2020.

The proceeds of fraud and corruption in the Durban Solid Waste (DSW) tender are close to R389m, the State alleged in the Durban Commercial Crimes Court on Wednesday.

Prosecutor Ashika Lucken was addressing Magistrate Dawn Somaroo in the case in which former eThekwini mayor Zandile Gumede and 21 others are accused of a string of charges.

The amount she gave on Wednesday is R181m more than the R208m initially mentioned in the case.

Lucken revealed a plethora of details on Wednesday.

She said investigations were likely to wrap up in six months, saying most of the work had been completed and that “outstanding matters relate to financial records and documents”.

However, Somaroo said the matter should reconvene on April 16 to “see how far investigations have gone”.

“We will meet and ensure investigations are at the right pace for the six-month mark.”

Lucken said the prosecution had 55 affidavits in the matter and that the State issued subpoenas relating to 427 bank documents.

She also said that during the investigations, the audit team discovered 4,000 financial documents related to the accused.

“Financial documents were found in October 2019 during the asset forfeiture search. A bundle was discovered in one of the accused’s houses that [relate] to the DSW tender. We linked payments from the municipality to entities under investigation.”

Lucken said they encountered no hurdles while trying to access bank records.

“There have been slow returns from the banks. They were giving preference to subpoenaed state capture and Zondo commission documents. The audit team leader, however, contacted banks and explained our matter is on the court roll and should be a priority.”

They have been receiving documents since Monday.

Lucken also said they traced 3,200 transactions which led to registration enquiries for 61 vehicles related to the accused.

“We are about halfway through this process now.”

In addition, investigators sifted through 39,000 pages of cellphone data, the court heard.