The EFF and Malema's counsel said the Act was used for political gain to suppress people speaking out against apartheid, adding that this is seemingly happening today. 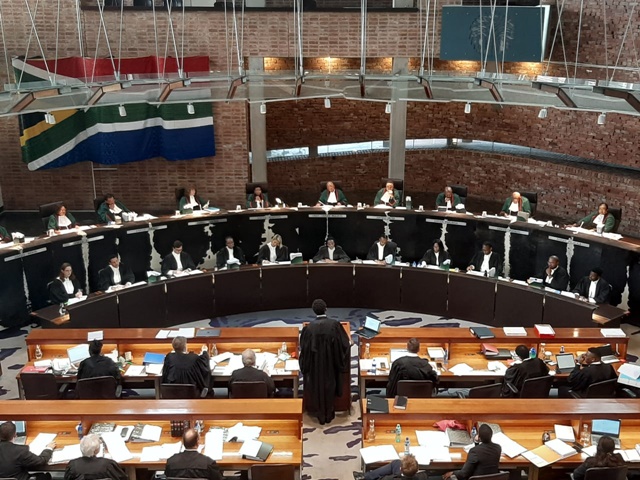 Legal representatives for the EFF and its leader Julius Malema presented a leave to appeal application in the Constitutional Court on Tuesday with the aim of having sections of the Riotous Assemblies Act declared unconstitutional.

The application relates to a ruling of the North Gauteng High Court in Pretoria which found that the Act was constitutionally invalid because, the court said, “it requires someone found guilty of inciting others to commit a crime to be punished with the same severity as the person who actually committed the crime”.

Tembeka Ngcukaitobi, on behalf of the EFF and Malema as the applicants, also argued this on Tuesday, saying Section 18(2)(d) of the Riot Act “punishes the inciter of a crime with the same sanction as the perpetrator of the incited crime”.

In 2014 and 2016, Malema called on people to occupy vacant land. The National Prosecuting Authority (NPA) instituted charges against Malema under the same section of the Act.

The EFF and Malema then approached the high court to set aside the NPA’s decision to prosecute Malema. They also sought to declare the section of the Act unconstitutional and to re-interpret the Trespass Act to mean that it is no longer a crime.

Ngcukaitobi further argued on Tuesday that the section criminalised free expression, protected in Section 16 of the constitution.

One of the reasons for this, he said, was because when the Act was passed, it was done to “silence those who dared speak against apartheid”.

Ngcukaitobi explained that a year before the Act was passed, 3,000 South Africans gathered to write the Freedom Charter and in response to this, the Riotous Assemblies Act was passed.

He argued that it was founded on the outdated ideals of apartheid.

“We submit that in its character, in its history and in its use, the Riotous Assemblies Act was designed as an instrument of a different society which was founded on racial oppression.”

He said the Act was used for political gain to suppress people speaking out against apartheid, adding that this is seemingly happening today.

“The constitution’s promise of free speech is, at its core, a right to say what the ruling party may find uncomfortable and unsettling,” the applicants said in court papers.

“Speech about land ownership and how to solve landlessness is heartland political speech. The government may find the EFF’s views and policies on land inconvenient…. But those without land – those left without a voice because of the racist laws of the past – have a right to be heard.”

Ngcukaitobi said the section of the Riot Act was out of place in South Africa’s new Constitution.

Arguments also concerned the proper interpretation of the Trespass Act. The applicants argued that a correct interpretation of this Act would be one which excluded unlawful occupiers in the terms of the Prevention and Unlawful Occupation of Land Act.

The respondents, the Minister of Justice and Constitutional Development and the NPA, both believe the Riotous Assemblies Act is not unconstitutional and do not support the High Court’s ruling.