Malema and Ndlozi plead not guilty to cop’s assault

The two are on trial in the Randburg Magistrate's Court and are accused of assaulting police officer, Lieutenant Colonel Johannes Jacobus Venter, in 2018. 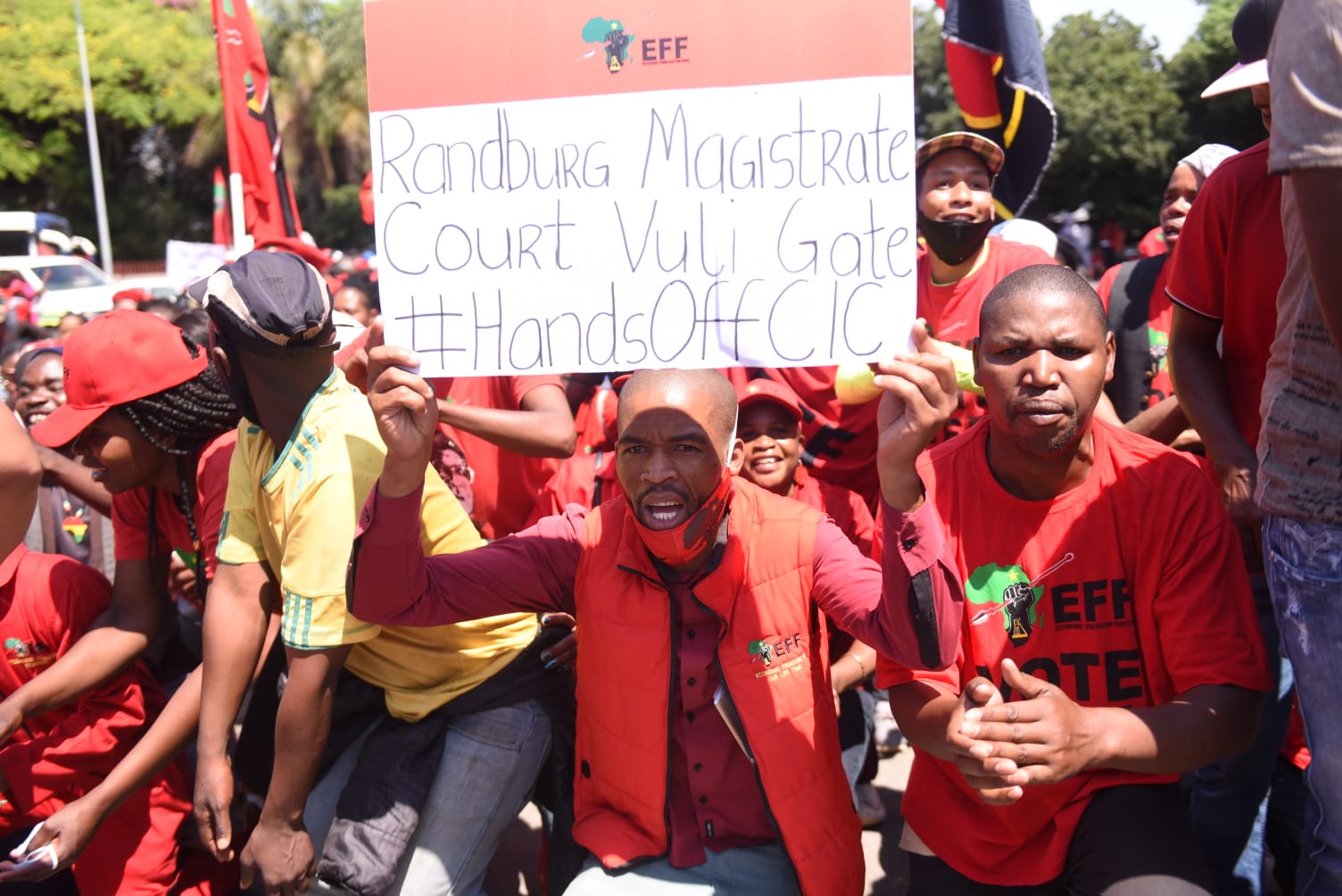 EFF supporters outside the Randburg Magistrates Court to support their leader Julius Malema and Party MP Mbuyiseni Ndlozi who are accused of assaulting a police officer during the funeral of ANC stalwart Winnie Mandela, 28 October 2020. Picture:Nigel Sibanda

EFF leader Julius Malema and MP Mbuyiseni Ndlozi have pleaded not guilty to a charge of common assault in connection with an incident that occurred at the funeral of struggle icon Winnie Madikizela-Mandela in 2018.

The two are on trial in the Randburg Magistrate’s Court and are accused of assaulting police officer, Lieutenant Colonel Johannes Jacobus Venter, at the funeral at about 15:40 on 14 April 2018 at Fourways Memorial Park. The incident was caught on CCTV.

After pressure from lobby group AfriForum, the National Prosecuting Authority decided to prosecute.

ALSO READ: ‘At no stage’ did cop provoke Malema or Ndlozi in assault case, court hears

Malema and Ndlozi claimed that police attempted to bar them from entering the area to bid farewell to the struggle icon.

Venter, who is attached to the Presidential Unit, took the witness stand on Wednesday. He has been part of the police force for more than 30 years and has been with the unit for six years.

He told the court that several people were prevented from entering the premises on the day of the funeral.

Women who were in possession of accreditation, were also not allowed to enter until the deceased’s family arrived.

At around 15:40 a convoy that included officials from the Presidency and members of government, led by an army motorcade, arrived, along with the hearse.

Then, the witness said, a black Mercedes Vito arrived but there was no visible permit displayed on the left of the windscreen.

“I stopped the vehicle and went to the driver’s side. The driver greeted me. I did not [recognise the driver].

“The driver informed [me] that the leader of the EFF, mainly, Mr Malema was inside the vehicle. I looked and saw he was inside. I greeted Mr Malema.”

Venter told the court that he informed Malema that the vehicle could not enter but that they were more than welcome to walk in along with other guests who had arrived by bus.

“Mr Malema said he will not walk in, he will drive in.

“Whilst I was standing in front of the vehicle, I was then pushed from the right hand side. I cannot say who had pushed me.”

Suddenly, Malema jumped out of the vehicle and said: “No white man will stop me!”

He said he was then pushed towards the left of the vehicle but could not see who pushed him.

At a stage, Malema and Ndlozi also pushed him, he said.

“Whilst I was still standing in the front of the vehicle, I was pushed by Mr Malema and Ndlozi,” he testified

The second push was so hard that he lost his balance, the court heard.

A General Zulu warned him to avoid the altercation, he said.

Malema and Ndlozi then proceeded to enter without permission, Venter testified.

Watch live: Malema, Ndlozi in court for day one of assault trial