Since leader Vimbeni Shembe's death in March 2011, the church has been divided over who should be at its helm. 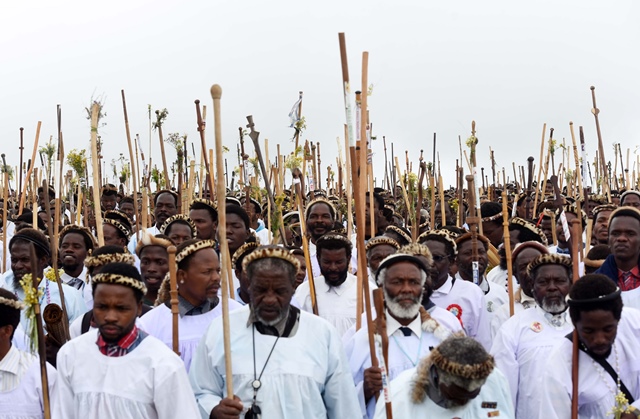 The case concerning the leadership succession battle in the Nazareth Baptist Church, also known as the Shembe Church, at Ebuhleni is back in the spotlight, this time in the Constitutional Court.

Mduduzi Shembe, the son of the late leader Vimbeni Shembe, approached the apex court for leave to appeal a Supreme Court of Appeal (SCA) ruling.

In 2019, the SCA upheld a KwaZulu-Natal ruling that the late Vele Shembe was the legitimate leader of the Shembe Church, News24 reported.

The High Court found the constitution of the church governed the question of succession.

It also found the trust deed was not applicable in the case.

Vele was then declared the lawful successor to the late leader of the church, Vimbeni Shembe.

The court’s decision came after Mduduzi and his supporters – the Ebuhleni group – contested a 2016 Durban court ruling that had declared his uncle, Vela Shembe (who has subsequently died), to be the legitimate leader of the church.

And now, Mduduzi wants the Constitutional Court to “correct” the SCA ruling, saying it “contradicts the prevailing legislation regulating trust in our country”.

During the hearing on Tuesday, advocate Radhakrishna Choudree SC for Mduduzi and others said “whatever had occurred regarding the nomination of the late Vela Shembe occurred without the use of a trust deed which we submit was a document that should have been at work in this case so ultimately, yes he has been nominated … but a process did not occur through the trust deed”.

Choudree told the justices the appointment of the late Vele Shembe was “lacking”.

“It’s hanging because there was no fulfillment of the rituals required to complete his appointment and those requirements flowed from the trust deed,” he said.

But Justice Leona Theron said that that would not make Mduduzi eligible for leadership.

Theron told Choudree if he was successful at the Constitutional Court in setting aside the SCA ruling, the judgment of the high court would still stand.

Responding, Choudree said the trust deed would allow from the ranks of pastors and reverends to make a choice, which would go before the committee to decide on a leader.

He added Vele’s position had been vacant since his death, adding one should interpret the trust deed which had a formula on what should be done about a successor.

“There is a position [which] can be filled and it doesn’t mean automatically that the applicant will be given that position, he will have to vie for that post if he so desires with other members of the church for that position and that will be filled by a committee,” Choudree said.

Since Vimbeni’s death in March 2011, the church has been divided over who should be at its helm.

The succession battle erupted at Vimbeni’s funeral when his close friend, Chief Mqoqi Ngcobo, announced Vimbeni had confided in him on various occasions his wish for his son, Mduduzi, to succeed him.

It declared that he “nominates and recommends” Vela Shembe to take over the leadership role, News24 reported.