Skukuza ‘poaching’ court is back in business

The court has undergone refurbishment, and cases, especially those related to rhino poaching, will be heard soon. It has been closed since 2019. 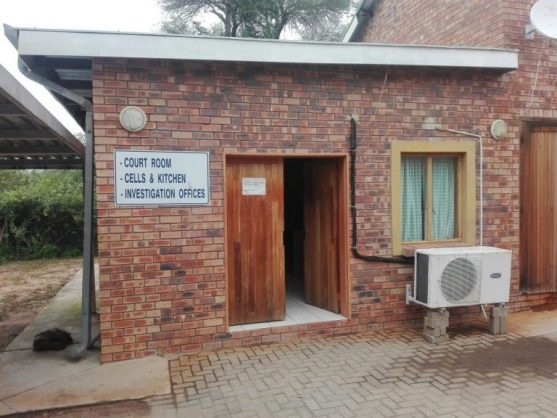 The Skukuza Regional Court has been closed since August 2019. Picture: Lowvelder

A tedious and frustrating battle to reopen the Skukuza Regional Court has emerged victorious, after an announcement made by the South African National Parks (SANParks) on Thursday.

The court was closed by Mpumalanga regional court president Naomi Engelbrecht in August 2019, who wanted the court be moved to Mhala Court, almost 100km from Skukuza, for dubious reasons.

Among them was the claim that the court’s building had not been proclaimed a legitimate court.

After the closure, a battle ensued between Engelbrecht and Mpumalanga High Court Judge President Francis Legodi. Legodi, who is Engelbrecht’s superior, instructed her to reverse her decision, but she ignored his instruction.

Legodi and the conservation community believe the court’s location in Skukuza to be integral, as it is in close proximity to the victims of wildlife crime.

The court in its heyday boasted a 99.8% rhino poaching conviction rate, and 100% success rate in opposing bail applications.

Managing executive of the Kruger National Park, Gareth Coleman, said SANParks was “happy with the decision”, and looked forward to operations resuming at the court.

SANParks said the court has undergone refurbishment, and that cases, especially related to rhino poaching, will be heard soon.